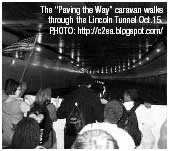 AIDS activism has been presumed dead countless times, since before Rent hit off-Broadway. To make sure the movement’s a long-term survivor, the Campaign to End AIDS (C2EA), a national coalition of HIV service providers and advocacy groups, pulled off an ambitious series of events from October to early November. Eight caravan riders of people living with HIV and their supporters drove cross-country through 49 states. Fifty New Yorkers walked to join the others in Washington, D.C. Caravans held 150 events with locals along the way, and four days of action in the capital featured a rally, interfaith service, youth march, civil disobedience and lobby day. “We now have activists busy organizing in all 50 states, Puerto Rico and D.C.,” Charles King, CEO of New York City-based Housing Works, said afterward.

Hurricane Katrina prompted a last minute postponement by a month – which organizers say meant fewer people than expected, about 500, made the trek.

Jessica Mardis of Gulfport, Miss., joined the “Soul of the South” caravan despite hurricane damage to her house. “My fiancé died in April,” she said. “I have a 2-year-old HIV negative son and I want to be here for him. The South Mississippi AIDS Task Force might lose resources after Katrina, but it needs funds to keep people like me alive.”

Almetha Williams met C2EA caravaners at the Jackson, Miss., AIDS Walk, and they encouraged her to come along. “I’m here representing the homeless people of my community, and I’m homeless myself,” she said.

New York City’s “Paving the Way” caravan walked – first through the Lincoln Tunnel Oct. 15 and then through 15-mile days alongside busy highways. Their chants, including a special “marching to the end of AIDS” version of “Ain’t Gonna Let Nobody Turn Me Around,” invigorated the other road-weary caravaners, whose voices joined in at the D.C. protests.

Medicaid cuts, a pending vote that could decide the Global AIDS Fund’s future and HIV prevention policy changes galvanized demonstrators. On Sunday, Nov. 6, early- 20-somethings with HIV led a small but fiery night-time march to the White House, waving pink glow-sticks as supportive clubgoers cheered from the sidewalk. C2EA Youth coordinator Johnny Guaylupo spoke about testing positive at 17 as a gay Catholic-school student in the Bronx. “My school didn’t have real sex ed,” he said. “I was told not to have sex until

marriage, but I couldn’t get married.”

The next day, direct actions hit several influential thinktanks and the White House to protest funding for evangelical groups’ unproven abstinence-only programs. First, 12 activists led by Housing Works were arrested at the Family Research Council after chaining themselves to a traditional marriage exhibit. Later, 29 C2EA activists were arrested in a die-in at the White House after a march of several hundred awarded “Golden Tombstones” to Christian Right groups like the Medical Institute for Sexual Health, which advocates warning labels for condoms.

King says C2EA’s statewide networks are forming a new national steering committee to shift decision-making from veteran organizers in New York. “By sleeping in church basements and asking churches to provide food, we brought in people who might never have participated,” he said. “We need to get back to the grassroots style of mobilizing people.” Julie Davids, Community HIV/AIDS Mobilization Project director, added, “It’s time to stop bemoaning the AIDS movement that was and start building the AIDS movement that’s going to be.”

through the Lincoln Tunnel Oct.15.