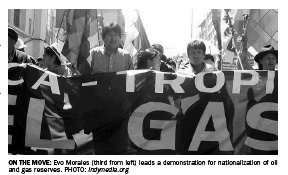 COCHABAMBA, Bolivia—On Dec. 18, Evo Morales was elected President of Bolivia with a 54 percent majority, the first modern Bolivian president to ever do so, or even come close.

Headline writers in the foreign press have had a field day trying to pin a label on Morales’ surprise victory. The New York Times announced the victory of a “coca farmer”. The Chicago Sun-Times abbreviated Morales as a “leftist”. CNN picked up a campaign rally declaration in which Morales called himself, the US government’s “nightmare”. But what does the election of Morales to the presidency here really mean?

Rejection of the Washington Consensus

First and foremost it means that the Bolivian people, across class lines and regions, are demanding a reversal of twenty years of market-crazed economic policies pressed on the country from abroad, and by the World Bank and International Monetary Fund in particular. Growing coca leaves was not the issue in these elections. Recovering national control over gas and oil, privatized away at bargain prices in the 1990s, that was the issue.

Nearly six years after the people of Cochabamba took to the streets to take back their water from the Bechtel Corporation of San Francisco (a privatization done under pressure from the World Bank), the nationwide voices of protest for economic change found their voice on the ballot through Evo Morales. In his victory speech he told cheering supporters, “We will change the economic models that have blocked development for the people.” That change begins with Morales’ plans to take back control of the nation’s vast gas and oil reserves and renegotiate all the nation’s contracts with foreign oil companies.

Economic foolishness? Joseph Stiglitz, the economic Nobel laureate and former chief economist at the World Bank didn’t think so when he spoke with the New York Times Magazine in November. “They could do it,” he said, noting that other oil companies would gladly negotiate new deals on better terms.

The Rise of Bolivia’s Indigenous Majority

Second, Morales’ victory represents the rising of the country’s Indian majority into power. Last night, speaking to the nation’s Quechua and Aymara people he said, with clear pride, “For the first time we are the president.”

I saw that indigenous identification with Morales up close in October when I spent five days in a small Quechua Indian village three hours off into the mountains. On a sunny afternoon I sat with the village leader, Lucio, a man I have known for almost a decade. I asked him if the coming elections were big on people’s minds. “No, we are really more worried about whether it will rain soon.” I asked him if people were excited about Evo Morales and the prospect of electing an Indian as president. “Well, he is really just a politician.” Then I asked him whether the people of the village would vote. “Oh yes, we will vote. All 400 of us will walk together 45 minutes to the place where we vote and we will all vote for Evo.”

And on election day, Bolivians by the millions marched distances short and far to give Morales the biggest mandate of any president here in half a century.

There are risks to be sure. The people who I have worked with here as activists for many years are suddenly Senators and Congress members. They are good people but, like Morales, they are likely to underestimate how hard it is to actually govern. The dance with foreign donors, including the US, will be difficult but essential, with Bolivia dependent on foreign aid for a huge portion of its annual budget. The economic plans that Morales and his backers have in mind, important as they are, will also prove difficult. Putting twenty years of economic toothpaste back in the tube is no easy task.

In addition, any political victory, especially a big one, is a recipe for disaster in itself. It makes people think that their public support will endure. It invites recklessness. One need only look to Arnold Schwarzenegger’s recent ego-driven rise and fall in California to see the process on display. And in Bolivia, public discontent doesn’t just mean people turn against you at the polls. In Bolivia it means they block the streets. It means they chant for your downfall and sometimes win it.

Morales takes office with far fewer options than he may think and with public expectations that will be virtually impossible to meet. Already some social movement leaders have given him just three months to take strong action on retaking the nation’s gas and oil and in convening the long-awaited constituent assembly to rewrite the constitution.

Again, an Example for All of Us

But for now, Morales and his backers, and the Bolivian people along with them, have won a victory that is both sweet and historic. When I first moved back to Bolivia in 1998 the country was governed by Hugo Banzer, a former dictator. World Bank and IMF economics was the rule of the day. Beginning Jan. 22, Bolivia will be governed by a man who earned his political stripes confronting Banzer and others in the streets and the market fundamentalism forced on Bolivian from abroad will begin to be dismantled piece by piece.

Bolivians have succeeded remarkably in declaring what kind of country they don’t want. Now the challenge is to build, in a practical and sustainable way, the country that they do want. I think there is a decent chance that they’ll pull it off. If they do they will set, once again, an example for all of us – that what’s possible in the world is often more than what we think.

Jim Shultz is the executive director of the Democracy Center (democracyctr.org) and author of The Democracy Owners’ Manual. He has lived in Bolivia since 1998.