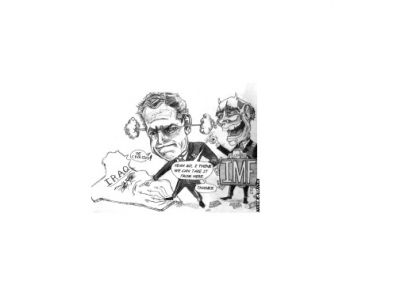 The great failure of the armed Iraqi resistance has been its inability to forge a national struggle. The resistance to the U.S. occupation is bounded by religion, ethnicity and geography – in other words, Sunni Arabs concentrated in and around Baghdad and along the Tigris and Euphrates rivers west and north of the capital.

Where the guerrillas have failed, however, the IMF may succeed. On Dec. 23 the IMF announced a deal with the Iraqi transitional government for a $685 million loan tied to “controlling” wages and pensions and redirecting “expenditures away from general subsidies.”

With Iraqis trapped between a crushing occupation, home-grown death squads and pathological suicide bombers, the IMF thinks the proper salve is to slash food subsidies and increase fuel prices up to 20-fold.

The response was immediate after the first round of price hikes on Dec. 19 (interestingly enough, just days after nationwide elections). After prices on gasoline increased from 5 cents to 65 cents, large-scale protests broke out around the country. In many areas protesters blocked roads and besieged government offices. The southern city of Basra rescinded the hikes while in the Kurdish north, police shot dead four protesters on Jan. 1 after they torched cars and gasoline stations.

At the same time, many of the protests have tied the fuel increases to a lack of basic services and jobs. The government says it needs to raise fuel prices to the level of neighboring countries to discourage smuggling, to which the protesters respond then they should have jobs, electricity and water as in those countries, too.

The protests may be prelude to even greater unrest if the Iraqi government moves to cut food subsidies by an initial 25 percent, according to Radio Free Europe reporter Kathleen Ridolfo.

The subsidy cuts and loans are all tied to a deal for Iraq to pay back 20 percent of $40 billion owed to the “Paris Club” of 19 Western nations. No one expected Iraq to pay these loans back, but now it will be saddled with a debt burden equal to 30 percent of its gross domestic product of $26 billion in 2004, as estimated by the European Union. (And only 30 percent of the $40 billion is to be forgiven outright; the rest is contingent upon implementing the IMF “reforms.”)

It seems like utter insanity: cutting food and raising energy prices on a battered and destitute population, which will now see precious earnings slip away to powerful banks while the U.S. occupation closes up shop on reconstruction.

Yet it’s standard operating procedure for the IMF. When a country finds its house in economic disarray, the IMF shows up with a wrecking ball. It should be noted that as the United States has veto power within the finance body, the IMF is little more than a stalking horse for the U.S. Treasury Department and Western financial institutions.

Part of the IMF plan for Iraq is to “restructure” the state-banking industry, official speak for privatization, as well as to encourage the development of Iraq’s petroleum resources (for the benefit of transnational oil companies, of course). But it may backfire in the end as Iraqis realize that whatever the promises of the Bush administration to end the military occupation, the economic one continues unabated.