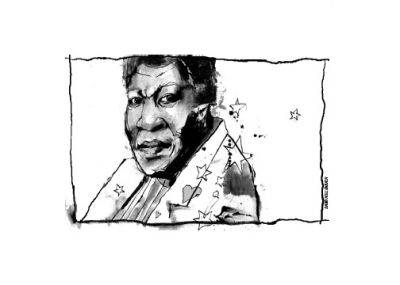 Octavia Butler’s conversation style is like her prose: lean and to the point. Not that she does not have a lot to talk about. She has written eleven novels including Kindred, whose heroine keeps falling back in time to save her white slavemaster ancestor, and Parable of the Sower, a richly-imagined tale of a small band of survivors founding a new earth-centered religion in the midst of a post-apocolyptic America.

You can call it save the world fiction, but it clearly doesn’t save anything,” she says. “It just calls people’s attention to the fact that so much needs to be done and obviously they are people who are running this country who don’t care.”

Winner of the Hugo Award for science fiction and a MacArthur Genius Fellowship, Butler’s fiction bends the boundaries of race and gender, while focusing on the problems of pollution, the legacy of slavery, and racism. The Indypendent spoke with Butler, while she was on tour promoting Fledgling, her first novel in nearly a decade.

Q. What were some of your major influences in terms of decision to start writing science fiction?

Q.You mention wide openness and I noticed in Lilith’s Brood and your most recent novel Fledging there a great concern with bending the constraints of gender, race and sexuality, as well as open relationships. Do you think polygamy is the future of humanity?

A. No, I think the future of humanity will be like the past, we’ll do what we’ve always done and there will still be human beings. Granted, there will always be people doing something different and there are a lot of possibilities. I think my characters [Lauryen in Parable of the Sower and Shori Matthews in Fledging have communities that are important in their lives or build communities around themselves.

A. Well there’s only one novel that remotely deals with that concept and that’s Kindred. I was trying to make real the emotional reality of slavery. I was trying make people feel more about the data they had learned. I wanted to make the past real and [show] how it scars the present.

Q.What’s interesting to you on the literary scene at the moment?

A. I’ve been on the book tour for a few weeks, which means I haven’t read anything more difficult than a newspaper (laughs)so I can’t recommend anything in good conscience. One of my favorite books is Issac’s Storm by Erik Larson. It gives us a picture of the great storm that hit Galveston, Texas and gives us a picture of 1900. Also a book called T-Rex and the Crater of Doom, by Walter Alvarez. It’s a history of the finding of the asteroid that killed off the dinosaurs. I like it because it shows more about how science is done than most books that you read about the subject. It’s talks about how the way we think about science can become religious if we are not careful. There were people who were firmly entrenched in the belief that things can only happen one way, they found it difficult that it could happen another way.

Q.Do you see a tension between writing save the world type of fiction and the artistic impulses of the writer?

A. No, not at all. I have written books about making the world a better place and how to make humanity more survivable. While Fledging is a different type of book, The Parable series serve as cautionary tales. I wrote the Parable books because of the direction of the country. You can call it save the world fiction, but it clearly doesn’t save anything. It just calls people’s attention to the fact that so much needs to be done and obviously they are people who are running this country who don’t care. I mean look at what the Congress is doing in terms of taking money away from every cause that is helping people who aren’t very rich. Especially making it harder for people to get an education. Who would want to live in a world where there were fewer educated people?

Q.We’re speaking at time of crisis in the country between the Iraq war and Katrina. As a writer what makes you hopeful for the future?

A. At the present, I feel so unhopeful. I recognize we will pay more attention when we have different leadership. I’m not exactly sure where that leadership will come from. But that doesn’t mean I think we’re all going down the toilet, I just don’t see where that hope will come from. I think we need people with stronger ideals than John Kerry or Bill Clinton. I think we need people with more courage and vision. It’s a shame we have had people who are so damn weak.