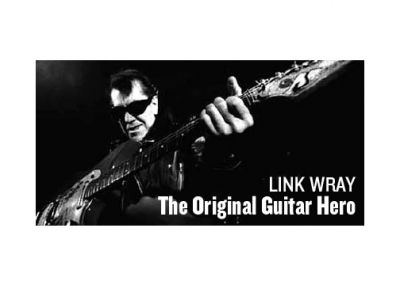 Distortion is an essential part of the modern electric-guitar sound. Amplifiers are designed to produce it, and there’s a whole arena of tone-grunging effects out there, from generically named “Overdrive” pedals to the Tube Screamer, the Experience, and the Death Metal, not to mention the Big Muff Pi, the Super Hard On, and the Soda Meiser.

It wasn’t always that way. Guitar distortion was discovered largely by accident. On March 5, 1951, Ike Turner’s band was driving from Mississippi to Memphis, on the way to a session at Sun Studios, when the amp lashed to the car roof fell off, breaking the speaker cone. They improvised a repair by stuffing newspaper into the speaker frame, and the result was a buzzy, distorted tone – and a number-one R&B hit, “Rocket 88,” that is sometimes considered< the first rock ’n’ roll record ever. Five years later in Nashville, a loose tube in guitarist Paul Burlison’s amp created a similar sound on Johnny Burnette’s rockabilly classic “Train Kept A-Rollin". Credit for the first intentional use of distortion on a record, however, belongs to guitarist Link Wray, who died Nov. 5 at the age of 76. A Pawnee Indian born in North Carolina, Wray started out as a country singer, switched to rock ’n’ roll after he heard Elvis Presley, and then switched to doing mostly instrumentals after he lost a lung to tuberculosis. In 1958, Wray was recording a tune he’d improvised on a gig in Fredericksburg, Va., a mutant blues based on a crunching, stroll-tempo power-chord riff – two Ds and an E that hung in the air and rippled with ominous tremolo – but the tone he was getting from his amp was too clean, so he punched holes in the tweeter with a pencil. “You’re just screwing up your amp,” his brother Doug, the producer, admonished. “Who cares, as long as we get a fuckin’ sound!” Wray replied. Titled Rumble, the record sold a million copies and reached #16 on the charts. But Wray didn’t fit major-label marketing concepts. His best work came in the ’60s, when he was gigging mainly in rowdy Washington bars. Aided by Doug, who had a studio in DC and later in rural Maryland, Link cut dozens of records for the tiny Swan label – raw, revved-up rockers like “Ace of Spades” and “Big City After Dark,” the eerie “The Shadow Knows,” and a scorching vocal version of Howlin’ Wolf’s “Hidden Charms.” Like most ’50s-rooted rockers, Wray’s career fell off in the hippie era, although he recorded several albums of quieter material and also developed a taste for Hendrixistic excesses. In 1977, he hooked up with punkrockabilly singer Robert Gordon, but the biggest boost to his fortunes came in 1994, when “Rumble” was included on the soundtrack of Pulp Fiction. Most of his material got reissued (the best overviews are the Mr. Guitar double CD on Norton and Rumble! The Best of Link Wray on Rhino), and he kept touring well into his 70s. Link Wray created a guitar sound and vocabulary that paved the way from the speeded-up blues licks of ’50s rock to the future furies of Pete Townsend and Ivy Rorschach, and his records are a testament to the joys of loud, crazed guitar noise packed into a driving, concise tune. “Who cares, as long as we get a fuckin’ sound!”