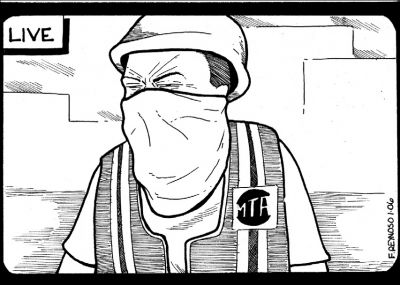 The night the subway strike was called, the TWU headquarters was crammed with TV anchors sending news to a city holding its breath. The mood was sour. NBC anchor Melissa Russo whispered loudly into her cell phone, “Who do these workers think they are, throwing a whole city into chaos if their demands aren’t met.” I knew two things, the strike was on and the media were going to make it ugly.

And ugly it was. The subway strike of 2005 can be summed up by a phrase: “Black workers are Evil Doers.” When the Transit Workers Union 100, a majority Caribbean, Latino, Asian- and African-American local, walked off the job, the corporate elite began to attack. The first target was the minds of working-class New York, and the first battle to be fought was to keep them from identifying with TWU strikers and imitating them. The media immediately fused images of criminals, terrorists and spoiled children to the picketing workers.

It began when Mayor Bloomberg said the TWU had “thuggishly turned their backs on New York.” He was quickly criticized for it. Soon, as the New York Times and Village Voice reported, on the public message board of the TWU website the mostly Black union was called monkeys and Toussaint was called Osama Bin Laden’s sweetheart.

The relentless framing of strikers as criminals continued in the New York Post as “Jail ’Em” was stamped over a photo of Toussaint behind bars and inside a photo of a cell on Riker’s Island.

Eventually the strikers went from criminals to terrorists. Mayor Bloomberg was relatively subtle, using the code word that the TWU had “hijacked” the city. Others went farther. Columnist Andrea Peyser wrote of the strikers, “The terrorists made it their mission to kill the economy. This brand of homegrown enemy pretends to have the city’s interest at heart while it takes aim at the most vulnerable workers.”

In a city where people walked bridges to get home after Sept. 11, to label a strike “hostage taking” and workers “terrorists” redirects the lingering fear and rage of that day at workers. None of this is new; equating organized workers with terrorists is a standard in the Right’s repertoire. In 2004, Education Secretary Rod Paige called the largest teachers union, the National Education Association, “a terrorist organization.” In 2002, in a stand-off between the West Coast-based International Longshore and Warehouse Union and its employers, Tom Ridge, the director of Homeland Security, called union head Jim Spinosa and warned him against striking, saying it would threaten national security.

Yet if workers are also citizens, how do they threaten their own nation’s security? This only makes sense if national security is defined by the profit margin of the corporate class. During the strike, our class divisions opened up, but the corporate media stitched them together with racially coded coverage. In the case of the TWU, a nonwhite union, tabloids implicitly invoked the difference between legal citizenship and cultural citizenship by equating transit workers with Al-Qaeda.

The corporate class was faced with an internal enemy, the workers whose interest in pay and benefits clashes with the capitalists’ interest in profit. Yet the rightwing media depicted it as a struggle within labor. Usually in the tabloids, members of the working class appear as characters in titillating crime stories. This time, they were cast as victims of a criminal strike by a selfish union.

“It’s not the way I want to get to work,” said a one-legged man lurching across the Brooklyn Bridge. The New York Post showed him bundled in yellow coat, gripping his crutches. He doubled as a symbol of a city crippled by the TWU strike and an alibi for the right.

The non-union working class has been hobbling for years since Sept. 11 as rising rents and falling wages have made the city too expensive to live in. But during the subway strike they finally got love as the New York Post, Daily News, the New York Times and the major news channels placed a halo of victimization on stranded workers. TV anchors wielding microphones amplified the stories of ruined Christmas, tired feet and children with no gifts to open.

Working-class New York appeared in the media as innocent victims of a selfish strike by greedy union workers. Yet in a reversal that approaches the absurd, the fact that missing a few days of work makes them vulnerable to real poverty does not add to an argument against unions but shows the very real need for them.

The final image of the strikers was of spoiled children pouting for undeserved gifts. In essence they were accused of being brats unable to control their appetites in the service of the greater good. It is an image that contradicts the very goal of the strike, which was about pensions, the ability to live decently in one’s old age.

Implicit in this last attack on the striker as spoiled children is a whole system of undeclared beliefs, the invisible ideology that supports capital. If the value of human life is determined by the labor it can sell, if we aren’t working to make a surplus profit for others, we are uselessly rotting, like fruit on a tree. The image of spoiled workers is in silent dialogue with Billie Holiday’s anti-lynching song, “Strange Fruit,” a ballad about the lynching of blacks whom whites could not totally control, a violence it took our media only three days of a strike to begin justifying.