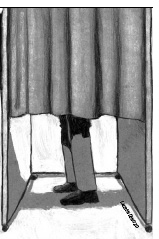 As the implementation deadline for the “Help America Vote Act” (HAVA) and the 2006 elections near, more than a thousand concerned citizens in Rochester, N.Y. attended a demonstration of electronic voting machines on Jan. 5.

Avery Beer, who was present at the event, told The Indypendent that he “realized the crucial necessity for verified elections” after serving as a poll worker in New Mexico during the 2004 presidential election. As part of the Election Protection coalition, he monitored a precinct using touchscreen machines without a paper trail.

“We had a small handful of people who came out, very upset,” he said. “When they pushed the final button, they realized that their vote had been changed.” Without a paper trail, according to Beer, the votes were essentially lost.

States have reported that electronic voting equipment supplied by companies such as Diebold, Election Systems and Software (ES & S) and Sequoia Voting Systems have dropped or changed votes, with unverifiable results, and that they are prone to electronic hacking and manipulation.

Prior to the 2004 presidential election, Diebold CEO Walden O’Dell trumpeted his commitment “to helping Ohio 111deliver its electoral votes to the President.” Sen. Chuck Hagel (R-NE) and former CEO of ES & S, won his seat against an incumbent Democratic governor in a landslide victory in which electronic voting machines were widely used. Diebold and ES & S machines currently perform 80 percent of the nation’s vote tallying.

Passed in October 2002, HAVA bans not only the type of voting machines used in the 2000 election’s “hanging chad” fiasco, but the lever machines used in New York City as well. The legislation allocated billions of dollars to states to replace such machines, to complete a computerized central database of voter registrations, to allow for disability access in one polling station in every precinct, and to require new identification standards for voters.

In New York state, individual counties are responsible for buying and implementing systems compatible with HAVA and NYS Election Board standards. After months of public hearings that ended only last month and four years of inaction by state legislators, counties are currently undergoing a 45-day comment period, during which members of the public can review options from vendors and give feedback about which machines the state election commission should certify.

“According to New York state legislation, each [county] board of election commission will make the decision [on equipment]; that will only happen after the state certifies this equipment,” said Peter Quinn, Republican co-commissioner of Monroe County, where Rochester is located. That could put the final decision on new equipment anywhere between February and April.

The analysis and choice of voting equipment is made all the more difficult for counties, when the equipment proposed doesn’t meet HAVA or NYS standards, or have provable track records of accuracy or transparency.

“I think both commissioners feel that the mechanical lever systems have served us well. [They] have set the bar for [being] safe, secure, simple,” said Quinn.

“[Of] the two vendors that are the most popular in New York state – Sequoia and Liberty – neither can demonstrate voter verified paper trail,” said Bo Lipari, director of New Yorkers for Verified Voting, a voter advocacy group that supports the optical scanner option.

According to Lipari, who is also a professional software engineer with more than 20 years experience, the impossibility of writing error-free software, the inability to test the security of software used by voting technology vendors, and the fact that “we don’t know how to verify that the software that is verified is running” makes the DRE models a dangerous prospect. With the optical scanner, Lipari says, “we’ve got 11that original record of voter’s intent that the computer hasn’t intervened with in any way.”

However, while optical scanners have been favored by voter advocacy groups, the state of California has refused to approve the use of both touch-screen and optical-scanning voting equipment made by Diebold after it was shown that memory cards implanted in the machines could change the results of an election.

Monroe County resident Jason Nabewaniec cited positive aspects for all of the models, but said, “None of them could guarantee security; [the companies] don’t want to give up rights to code, don’t want to give state access to software.” Nabewaniec also pointed out that many of the models tested aren’t built, yet paper-ballot functionality is promised to be added at a later date.

According to Sally Brown of the Rochester-based coalition Every Vote Counts, when voters questioned vendors about disability accessories and paper ballots, “they would say things like: ‘Well, we didn’t bring that.’”

If counties are unable to certify the new machines and implement the necessary training and education programs in advance of the 2006 elections, it could be another year before New Yorkers see new voting equipment. “I think [a delay] is likely to happen,” said Lipari. “We’re simply so far behind the curve.”

New York wouldn’t be the first state to delay implementation. On Jan. 5, Connecticut decided to defy the federal mandate and to continue using lever-system machines until equipment that meets HAVA guidelines can be approved. Connecticut Secretary of State Susan Bysiewicz stated that the decision came partly from the realization that promises of a HAVA-compatible system by vendors were not realized.

As for Quinn, he is noncommittal about whether Monroe County will be able to meet the 2006 deadline. “Our interpretation of federal HAVA legislation [is that] the goal is to meet deadlines of implementation,” he said. “[However] we do not have control over certification, manufacturing.”