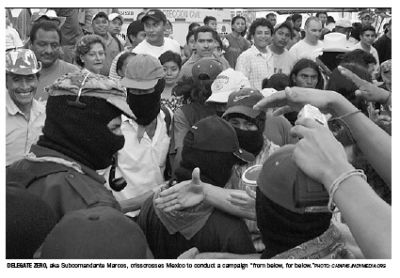 CHIAPAS, Mexico—Like a cross between Mad Max and Zorro, Subcomandante Marcos zoomed out of the remote Zapatista stronghold of La Garrucha on a black motorbike with EZLN blazed across its handlebars and a cock hanging off the back. As the gathered scrum of media scrambled to capture the dramatic exit and beginning of the new Zapatista political initiative, all they were left with was a cloud of dust and the fading squawk of the unfortunate chicken – the campaign mascot called “Penguin” for its lopsided appearance – riding pillion.

The infamous guerrilla commander, a kind of postmodern Che Guevara, was on the road again. Somewhere outside San Cristobal, reporters caught up with him and asked was he really going to campaign on this motorcycle. “All the way to Tijuana” he replied.

Under the moniker Delegate Zero, Marcos launches a six-month tour of Mexico, unarmed and apparently alone, not to speak or run for office, but ¨to listen to the simple and humble people who struggle.” This new political initiative, called the Other Campaign, is intended to influence Mexico’s July presidential election.

Rejecting the suggestion that they were leaving the armed struggle and entering the political mainstream, the Zapatistas say they are reaching out to anti-capitalist and leftist organizations across the country, and conducting a campaign “from below, for below,” focusing on “a radical transformation of the Mexican political system”

Flight from the Zapatista lair in the Lacandon Jungle – the Desert of Solitude of colonial literature fame – was, for Marcos, brief. Eighty miles away, some 15,000 Zapatistas and supporters heralded his arrival in San Cristobal. Amid the impassioned welcome, Marcos – joined by the other Zapatista comandantes – surfed through the multitude occupying a town center completely deserted of police and military.

Rapturous applause greeted Marcos as he took to the platform. An unlikely hero, he bowed his masked head and characteristically mumbled his words.

“I have been chosen to go out across the country to test the road and to see what dangers lie there within, and to recognize who by their face and word is down with the struggle. So that we can unite the Zapatista struggle with the struggle of the farmers and the workers of the country called Mexico.”

It’s been 12 years since the Zapatistas exploded onto the world stage with the 1994 armed uprising, and four years since the unarmed “Zapatour” across the nation. That tour brought out millions of supporters, but no resolution to the conflict as proposed legislation for indigenous autonomy died in Congress. Frustrated by the lack of progress, the Zapatistas fell into a silence and concentrated on building local autonomy in their zones of influence.

This led to the creation of 32 autonomous municipalities that refused to accept any state presence. They set about organizing health and education services, as well as overseeing the implementation of justice and social welfare measures, through a system of participatory democracy and assembly-based council communalism.

Despite heavy repression from the state, Zapatista guns remained silent during the low-intensity conflict. This strategy led to the Sixth Declaration of the Lacandon Jungle, which spelt out their political philosophy as distinctly anti-capitalist, against parliamentary democracy and in favor of direct or participatory democracy, as exemplified by their autonomous municipalities.

The Sixth Declaration also laid out a nonviolent strategy to critique and organize against the unequal, unjust and corrupt political system permeating Mexico.

In answer to the ever prevalent question posed by Lenin a hundred years ago – What is to be done? – the Zapatistas subtly rephrase it: What do we want to do? And the answer is “to reorganize the nation from below and to the left.”

For their part, political parties and the establishment have chosen to focus on the apparent abandoning of arms instead of the political issues raised by the Other Campaign.

“It’s a good thing that they have left behind the armed struggle,” said Cardinal Rivera Carrera, head of Mexico’s conservative Catholic Church.

The outgoing ruling party PAN has also welcomed the new Zapatista initiative, but elements within the right-wing, neoliberal party, such as Congress leader Hector Larios, dismiss the campaign as “surreal and clownlike.” The center-left PRD – favorites in the poll to win the upcoming elections – are adopting a conciliatory tone despite much of Marcos stringent criticisms directed at their own neoliberal drift.

The PRI, who ruled the country for 70 years straight, is running a close second place to the PRD in the polls. Sinister elements within the ex-dictatorship are the ones to be wary of. They are the intellectual authors of the 1997 Acteal massacre of 45 people in a church, and the assassination of the reforming Presidential candidate Luis Colosio, in 1994.

Marcos has dwelt on the possibility of his own assassination as he goes about the country.

“We don’t fear to die struggling. The good word has already been planted in fertile soil. This fertile soil is in the heart of all of you, and it is there that Zapatista dignity flourishes.”

Hundreds of delegates from some of the 443 social organizations and NGOs that subscribe to the Other Campaign packed out the first series of town hall meetings held in San Cristobal on Jan. 2.

Marcos, masked and flanked by an unarmed civilian bodyguard, introduced the encounter. “It’s necessary to hold public meetings but not the type of the old politics where one speaks and the rest applaud.” In this sense, he proposed to differentiate the Other Campaign from the “electoral circus.”

Speaking from the floor, Fr. Miguel Concha Fray Francisco de Vitoria Human Rights Centre, explained how this new campaign was not a stunt to influence July elections, but a renewal of nationwide grassroots political organizing.

“It’s not an anti-campaign. This is another campaign that goes beyond the electoral consensus: it’s something focused on the medium or long term.”