Located on the edge of Haiti’s capitol city of Port-au-Prince, Cité Soleil is a vast neighborhood of crumbling tin shacks and endless heaps of rotting garbage mired in the most desperate poverty.

When I first visited in January, the air was always thick with the sound of machinegun fire exchanged between U.N. “peacekeepers” and armed local residents, who support Jean-Bertrand Aristide. A former priest-turned-president, Aristide was deposed and forced into exile by a U.S.-backed coup in February 2004.

As the Feb. 7 elections approached, the situation in Cité Soleil changed markedly. Gone were the young men toting automatic weapons and the gunfire. Instead, militants started donning tee shirts and organizing rallies to support the presidential campaign of former Aristide ally Rene Preval.

Despite many apparent attempts to disenfranchise the population of Cité Soleil from voting, — all voting centers were removed from Cité Soleil, forcing people to walk down the most dangerous road in Port-au-Prince in order to vote — on election day people showed up in droves to cast their ballots.

For Cité Soleil’s 200,000 plus residents, participating in the vote was regarded as a matter of life and death. They knew that the election of rightwing business candidate Charles Henri Baker would likely result in a massacre; whereas the election of Preval was expected to bring the development of schools, hospitals and housing.

On Election Day, I arrived at daybreak at the one of the voting centers on the far outskirts of Cité Soleil, to find that thousands of people had already been standing in line for hours. All day long, people rallied and danced through the streets carrying tree branches — the symbol of Preval’s Lespwa (or, “Hope”) Party — demanding the right to vote.

I watched the incredible passion of people fighting their way through the massive and chaotic line to have their voice heard in the election. In the face of considerable discouragement and obstacles, Cité Soleil residents persevered — and their efforts paid off in the successful election of their candidate. I can only hope that the strength and hope of the people of Cité Soleil is not forgotten by President Preval in the years to come. 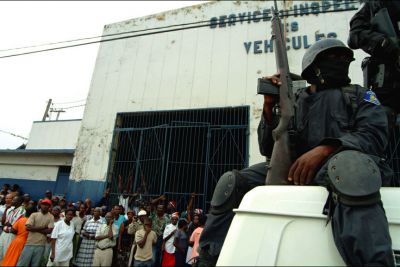