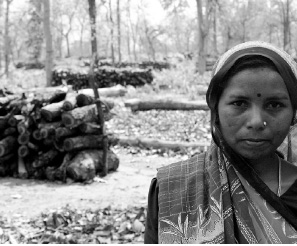 Women Of Batka Behra Defend Their Way of Life

CHHATTISGARH, India—”Zindabad!” shouts Bindia Bai, pressing her hands together in greeting as she sits down on the hard-packed mud floor to meet with fellow village women in the sunny courtyard of her home. This revolutionary rallying cry meaning “victory” echoes throughout Batka Behra village and has been spreading across the remote tribal hills of Chhattisgarh state in recent months. A new movement challenging government corruption and resource cooption is building among these ancient people.

Bindia and other indigenous people in the tribal region of Koriya live largely in isolation from mainstream Indian society, and survive through hunting and gathering from the surrounding forests supplemented by small-scale farming. Commonly referred to as “the tribals,” they have long been considered backwards by outsiders. Their society’s communal nature and isolation have made them ready targets for exploitation.

Pervasive corruption has compromised the enforcement of constitutional laws meant to ensure food security and protection from land displacement for India’s tribals. Most have seen their land and resources dwindle in recent generations.

“When we were children these forests were filled with bamboo plants which we used for weaving and tools,” says Bindia, “but then the people from Birla Corporation [an Indian paper manufacturer] came and now there is no bamboo.”

The Forest Development Corporation (FDC) – a for-profit department of the Indian government – arrived three months ago with intentions of clearing the land of old growth Sal trees in favor of a lucrative teak plantation. But Bindia and fellow Batka Behra women were determined that the Sal trees would not vanish as the bamboo had.

Armed only with their chant of “Nari Shakti, Zindabad!” (Women’s Power, Victory!), more than 100 women marched into the forest to confront the loggers. Recognizing that they were outnumbered, the loggers relinquished their tools to the angry women and fled. Those successfully confiscated tools remain locked away in the house of the village head. To date logging has not resumed.

The fight for the Sal forest is not the first political undertaking of Batka Behra’s women. They started organizing two years ago to ensure that a government doctor would visit their village more often. They went on to protest price gouging by distributors of government- subsidized rice, and then to advocate a more nutritious lunch menu at the local government school. But it is the fight for the forest that will ultimately determine the fate of their lives and livelihoods.

“We get everything that we need to survive from the forest,” explains Bindia, “leaves and seeds and food and firewood. If the government cuts these trees and replants teak we won’t be able to get what we need to live.”

This crucial battle for control over their resources has galvanized many in the area, encouraging Koriyans from diverse tribes to work together. The esteem in which the Batka Behra women are held is evident when they inspire an impromptu community meeting at the site of an FDC clearcut, where tribal villagers face off with security guards posted to protect the fallow timber stacked along the roadside.

“The government will listen and hear them out,” says one FDC guard in response to the passionate shouting coming from the small knot of angry villagers that has gathered around him. “This is what the majority of people are saying and so I’m liking it.”

But gaining the sympathy of the higher level officials behind the logging won’t be so easy. The financial motivations for clearing the forest can far outweigh any desire to protect the tribal way of life. The Sal trees that are being cut to make way for the plantation can fetch up to 10,000 rupees (about $250) each. The Maoist Naxalite insurgency in the area gives the government a reason to establish a forest presence and an excuse to suppress any resistance to such logging projects.

Despite these barriers, the women of Batka Behra remain determined to save the forest and have called a gathering of Koriyan communities and preservationists to meet with government representatives in an effort to permanently halt the logging. Even if these legal channels fail, the women of Batka Behra maintain that they will use any means necessary to protect their trees.

“First, when the men came to take the bamboo, we were even afraid of the motorcycles they rode in on and we ran away,” says Bindia, emphasizing how the bitterness of that past wrong fuels the current struggle. “Now we know we cannot afford to be afraid.”

This article was produced by the Common Language Project (commonlanguageproject.net).