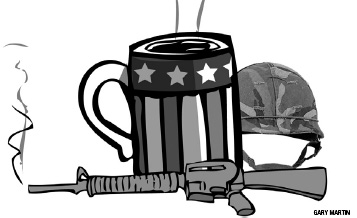 One of the greatest achievements of the Vietnam antiwar movement was its creation of a GI coffeehouse and counseling network. The first coffeehouse was opened outside Ft. Jackson, S.C., in late 1967, two-and-a-half years after American troops invaded Vietnam. Within weeks, hundreds of GIs had visited during their off-duty hours. Over the next year, similar projects sprang up outside 20 other major U.S. bases.

These projects embodied the “countercultural” spirit of the times. Sex, psychedelic drugs, and rock and roll coexisted with a strong antiwar message. Civilian activists, mostly recruited from the antiwar movement, worked in tandem with active-duty GIs, some of whom had just returned from Vietnam. At some projects, the soldiers played a leading role in setting political goals, providing counseling and putting out the antiwar newspaper that was a staple of every coffeehouse project.

Today, antiwar organizers are again discussing how active-duty GIs can be recruited to play a more active part in the struggle against the war. A Le Moyne College/Zogby International survey of soldiers fighting in Iraq, released in February, found that 72 percent of them wanted to be withdrawn within a year, while 29 percent favored immediate withdrawal.

Organizers from Citizen Soldier, a GI/veterans rights advocacy group, recently met with antiwar veterans and GIs in Fayetteville, N.C., home to Ft. Bragg, where 40,000 combat troops are stationed. They discussed the prospects for establishing a coffeehouse and counseling project near the base – the largest in the Eastern United States. Their hope is that a successful pilot project at Bragg could stimulate the creation of similar efforts at other key posts.

Both the U.S. military and American society have experienced enormous change since the Vietnam era. Foremost here is the transformation of a conscript-driven military to one that is entirely composed of “volunteers.” This has made the armed forces much less representative of American society as a whole.

One of the primary reasons why advocates of an “all-volunteer” military wanted to junk the draft was their belief that it fueled much of the antiwar opposition – especially among young people. When one compares the size and intensity of today’s movement against the war in Iraq with that of the Vietnam War, this analysis appears to be accurate.

The transition to a volunteer force has had two other significant consequences. One, women were integrated into most military jobs, except for the infantry and armor. Today, every sixth soldier is female, except in the Marine Corps. Second, the shrinkage of active-duty force levels, which became necessary once competitive wages were being paid, has meant that reservists and Guard troops must shoulder a much greater combat burden when the military deploys into combat. Today, one out of three GIs serving in Iraq is a reservist. These soldiers are older, have family obligations and are less accustomed to the rigors of military life.

These demographic changes are central to any discussion of how a coffeehouse project could attract the participation of GIs today. During Vietnam, the average low-ranking soldier was paid less than $300 a month. They lived in austere barracks and ate their meals in dingy chowhalls. These conditions made an off-base coffeehouse seem attractive as an off-duty refuge from the tedium of the “green machine” and its grinding routines.

Today, half of all soldiers are married and many have children. Their relatively good pay and benefits allow them to buy expensive cars and vans and many choose Applebee’s and Mickey D’s over the chowhall.

To counter serious problems with recruitment and retention, the Pentagon now offers a series of robust bonuses that range from $10,000 to $40,000, payable over the life of an enlistment hitch. Elite “Delta Force” troops can get up to $100,000 if they’ll sign for another tour. (A note to those who believe that recruiting shortfalls may force a reinstitution of the draft: The Pentagon has shown that it will spend whatever it takes to induce (bribe?) low-income youth to fill its combat slots.

One of the main attractions of the Vietnam-era coffeehouses was that GIs identified them with the “counter-cultural” changes that were sweeping America at the time. Psychedelic paraphernalia and drugs fanned the latent anti-authoritarianism of soldiers. This, in turn, sparked challenges to all forms of authority – sexual mores, gender roles, social conventions and the military’s vaunted chain of command. One key demand of the American Servicemen’s (sic) Union was “an end to sir-ing and saluting.” Explicit anti-war organizing, while important, was only one item on the projects’ agendas.

Popular culture today is much more diffuse, blending many different strands: rap, punk, heavy metal, goth, hippy, traditional rock-androll, and country-western. In lifestyle, openly gay couples (not on a military base, however!) co-exist with super-straight engaged couples who flaunt their pre-marital chastity.

Organizers concluded that a coffeehouse/ counseling project could succeed in attracting significant numbers of soldiers assuming that it provided internet access, good java, and plenty of free parking. Many young soldiers today quest for intellectual, cultural and political fulfillment, as they always have. A coffeehouse that combines an alternative bookstore with a lively mix of free musical performances, stand-up comedy and poetry (with some political speechifying thrown in) could become highly popular with many GIs.

A number of important questions remain. Who will finance the cost of one, not to mention a dozen such coffeehouse projects today? Certainly GIs can be expected to provide more than a small portion of the budget. During Vietnam, the United Servicemen’s (sic) Support Fund (ISSF), raised substantial sums, which it then parceled out to the local projects to help them pay rent and staff salaries. Nothing like the USSF exists today, but something along these lines will be needed if these projects are to thrive. Important first steps have been taken, but much more needs to be done.

Todd Ensign is the director of Citizen Soldier, a GI/veterans rights advocacy group, and author of America’s Military Today.