SIEM REAP, CAMBODIA—When Aki Ra met Chet in 2004, he had living on the streets of Phnom Penh, shining shoes to earn money and sniffing glue to curb his hunger. He’d lost his left leg in a land mine accident three years earlier
and hadn’t yet gotten the prosthesis he now happily shows off.

Even before losing his leg, Chet’s life was never easy. He was born in a village in Kampong Cham Province, about 50 miles north of Phnom Penh.

He doesn’t remember what his parents did, but his family was poor enough that he left at about age 10 for Phnom Penh in search of more money for food. His father died of an unknown illness in 2000. He thinks his mother is still alive, but he hasn’t seen her since 2002.

Chet’s accident came a year after his father’s death, while he was tending cows near his village. He says
he didn’t see the landmine because it was dark.

He walked alone to a hospital, where his left leg was amputated just below the knee. Because he was able to walk the injury might have been slight enough to allow him to keep his leg, but amputation is the automatic response in Cambodia, and Chet is just one of thousands who have been injured by landmines.

Now at 15 or 16 with a barbed-wire tattoo and a street kid’s demeanor, his tough guy posturing is belied by his open smile.

Aki Ra met Chet during a trip to Phnom Penh and invited him to live in the safety of the landmine museum on the condition that he stop sniffing glue and enroll in school. Chet agreed right away.

Chet is one of 20 children who live with Aki Ra and his wife Hourt at the Land Mine Museum, all victims of landmine accidents that either took a limb or left them orphans. Just on the other side of Siem Reap’s Red Light District, affectionately termed “Boom Boom Village,” the museum offers a sanctuary for the adoptees as well as many village children.

Aki Ra sees his taking them in as a chance for them to change their lives, and hopes he can give them opportunities they might not otherwise have.

“If I can help eight or nine out of every ten children, it’s better than nothing,” he says. But with his limited funds he often has little more to offer them than what he can hunt in the jungle, a hammock in the museum and encouragement to attend school. Still it’s better than life of the street.

Here, all of the kids get the chance to practice their English and Japanese on tourists, take language lessons from volunteers, or kick a soccer ball around the dusty tour bus parking lot across the road.

Chet is now off glue and in school. He is slated to receive one of the first college scholarships Aki Ra’s organization has fundraised for landmine victims. Chet says he likes to go to school because Aki Ra tells him it will be good for his future, but his sheepish shrug reveals some ambivalence.

“All I really like to do is draw and make music.” 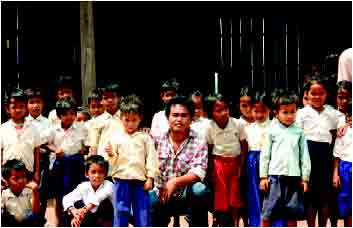