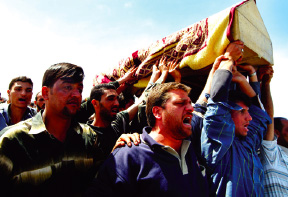 The Riskest Course For The Antiwar Movement

More than half of the U.S. public now says the Iraq war was a mistake, but almost all members of Congress support funding the war. The question for the antiwar movement is: Can it make politicians pay a price for supporting the war and thereby force its end?

The antiwar movement brings together three main elements. The first is counterrecruitment, which denies bodies to the military and hampers its ability to fight the war. (The Pentagon claims it’s meeting its goals, but it has reduced recruiting quotas and relaxed standards so far that many new recruits have criminal records or a history of violence or substance abuse or score at the bottom of aptitude tests.)

The second antiwar force is within the military itself. More than 70 percent of U.S. troops in Iraq want to see the war ended within a year. A number of antiwar military groups have sprung up, such as Iraq Veterans Against the War and Military Families Speak Out. With repeated deployments, the military itself is breaking down, with high rates of divorce and psychological disorders and the exodus of many junior level officers.

The third element comprises traditional peace and social justice groups, many of which are part of United for Peace and Justice (UFPJ). It plays a vital role by staging the big marches that give the antiwar movement media visibility, reaching out to mainstream groups and helping to sustain the ongoing work of its member organizations. Its tactics include marches, vigils, leafleting, teach-ins, petitioning, lobbying, etc.

But the antiwar movement hasn’t been more successful because more radical elements are missing, particularly those at the heart of the anti-globalization movement. The success of the anti-globalization movement was based on tying single-issue groups together under a simple, compelling idea – opposition to corporate globalization and the rule of the market – with identifiable targets, the WTO and IMF, and using tactics that made the institutions pay a price for continuing with their course of action – by attempting to shut them down.

Meanwhile, the antiwar movement has been unable (beyond sloganeering) to tie the war to domestic issues, such as domestic spying and repression of civil liberties, the targeting of immigrants under the “war on terror,” neo-liberal economic policies, the destruction of New Orleans, oil industry profits and energy policy.

While direct action activists and anarchists have failed certainly to create a radical wing of the antiwar movement, UFPJ has not provided that space either. UFPJ has been successful at making room for legal, mainstream protests, but taking a purely legal approach against an illegal war and an illegal government is bound to fail.

The protest tactics rely on either numbers or moral suasion, while the electoral tactics – distributing voter guides, asking voters to sign a “pledge” not to vote for pro-war candidates and “bird-dogging” candidates – require significant resources and people power, which UFPJ lacks. To its credit, UFPJ has suggested one tactic that could be successful: pressuring candidates themselves to sign a pledge opposing the war, and thereby forcing them to take a public stance.

UFPJ lacks labor power because it’s failed to inspire the most committed and creative activists, and it lacks resources because it’s become dependent on funding from liberals who are not interested in real change and think letting Bush twist in the wind is a strategy.

One glaring failure is that after three years of war and at least a dozen major marches, there has not been one attempt to organize a Seattlestyle action to nonviolently shut down the “war machine” in Washington, D.C., during the workweek.

Another tactic would be to revive the “Pledge of Resistance” of the Central American solidarity struggles, that is, asking individuals to pledge to commit civil disobedience if the U.S. tried to widen the war. UFPJ could pour more resources into counter-recruitment, too. The organization does not have anyone working full-time on counter-recruitment despite its effectiveness in reducing recruitment levels. One successful but underutilized tactic is student walkouts.

UFPJ is also hobbled by its lumbering, reactive style. The Bush administration has been threatening to attack Iran for more than a year, but UFPJ’s first public statement opposing a new war was only issued this April.

And it needs to be forthright about its failure to do any real organizing around the Palestinian struggle, which has alienated many activists. UFPJ lists all sorts of activities undertaken in support of Palestinians, but apart from organizing one day of action against Israel’s Apartheid Wall in November 2003, every “activity” is a statement, a call or a resolution.

There is the risk that UFPJ will repeat the mistake it made in 2004 of shifting from antiwar work to electoral politics. Leading up to the congressional elections this fall, it’s been courting groups like organized labor, the National Organization for Women and Jesse Jackson’s RainbowPUSH Coalition. While they may help boost turnout at a march, these groups are too wedded to the Democrats to hold them accountable for their support of the war.

The reality is that even as the war has become overwhelmingly unpopular, many of the most committed activists have shifted away from antiwar organizing – mainly into local organizing, New Orleans reconstruction and immigrant rights.

Ending the war means creating space for both radical and liberal groups and tactics; otherwise we’re doomed to march in circles for years.