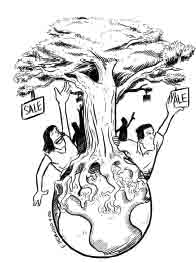 Is shopping a way to buy community? I went to the new Trader Joe’s on 14th Street, curious about a store that when it opened, had 100 people lined outside. They waited and entered and left happy. When I got in and read the labels – whole grain bread, antioxidant berries, raw nuts – I realized the cause of their joy. We were buying Eden.

Trader Joe’s promises that its food is healthy, delivered directly (and cheaper) by cutting out the Middle Man and it’s tastetested. The first promise is health but organic food is not about health. In fact that may be its most supple alibi. When we cook and spice it, preserve and package it, we make food into a sign that gives physical nourishment and ideological certainty. When we eat organic we consume the code of purity, of a lost connection to nature that reaffirms our salvation from the dangerously poisoned world of artificial ingredients and artificial people.

At the other end of Union Square is Whole Foods Market, a larger store, more organic foods, more expensive and less fun. No Hawaiian shirts. No quirky pirate shtick. Yet those are not the reasons it fails to inspire the devotion that Trader Joe’s does. It’s because they don’t protect us from the Middle Man.

The Middle Man is the shadowy figure of American commerce; he intercepts goods in its vulnerable transit between the hard-working farmer and the honest buyer. He is the bureaucrat who lets food sit and rot while taking his profit. Trader Joe’s plays on this equation, touting its, “honest, everyday low prices.”

The Middle Man also alienates us from our food by putting his hands on it before it reaches our mouths, so the celebration of his absence derives from the fear of being touched by a stranger. Trader Joe’s keeps us safe and boast about it in slogans such as, “We like to be part of our neighborhoods.” Trader Jo’’s is not a part of a neighborhood it’s the replacement for it so people stranded in alienated lives can feel safe as they gentrify New York of its dangerous diversity.

Feeling safe allows our inner-child to romp through the stores, hence the playful cartoonlike atmosphere. The clerks wear Hawaiian shirts. The walls are lined with cute names. It is a sense of safety that is increased by the cultural distance the food must cross. When I was there, a clerk at the Grand Sampling Station offered samples of exotica. “A little Thailand in your cup,” she said.

Even though most foods have the Trader Joe label, it’s the cosmopolitan address that sells it. Trader Joe’s and other gourmet stores offer an international experience; cheeses from France and Ireland and Switzerland, sauces from Thailand or Mexico. As delicacies from the world come in, their tasting panel translates the foreign into the familiar and gives customers the freedom to taste global-citizenship.

I went home with bags of healthy food but at night I went to my fridge and kept opening it. I was hungry for something unholy, something synthetic, a Twinkie maybe and went to the corner store. After being at Trader Joe’s, where international food was sold by a mainly white staff, I now was buying cheap snacks at the Arab-owned bodega. In Manhattan, stores “immigrated” food to feed the international tastes of middle-class whites while in Brooklyn, immigrants sold junk food to working-class blacks. Three people stood in line, each one yelled through the plastic shield for beer or cigarettes or candy. Each set coins in the turnbox and pushed, the man inside took it, put a bag and revolved it again. The customers grabbed their bags and stalked off.

The plastic shield is a material sign of fear and distrust of customers with no self-control. When night falls, stores in Bed- Stuy encase their employees in bulletproof booths, it’s a backwards zoo, where animals roam free and the handlers hide inside. Unlike the Eden of Trader Joe’s, where communion between man and nature reigned, here it was the “concrete jungle” where race and class oppression, the legacy of Social Darwinism, turned us into competitors.

I got my snack and went home. A black guy saw me, pointed at my dreads and nodded, “Respect bredrin, Lion of Judah.” I nodded and hid my Twinkie, I didn’t want him to know how far from salvation I was willing to fall.