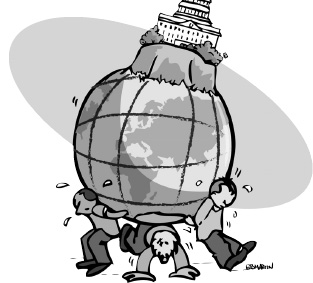 I left the lights on again. I often do but a scene this morning in the travel show “Globe Trekker” forced me to question why. The British host Ian was stranded in the dark on a dirt road in Mozambique. The night was held back by the weak glow of the camera. Ian mockingly whispered through a strained smile, “It’s very dangerous out here.”

I watched the TV, blackened by the Mozambique night, in a brightly lit room. The light exposed my daily wastefulness – my long hot shower, the plastic bottles piled in the trash, the food left uneaten. I don’t think about anything ever running out.

The privilege to waste is my inheritance as a member of the City on a Hill, the classic image of American Exceptionalism that began with the English Puritans. They believed we were destined be a model of purity leading humanity. Today their religious morality is overtaken by consumer morality where we are purified of want and each desire is met with a product that answers it.

We are the model of humanity, like mannequins living inside a display, needing to be seen by the world and yet be separated from it. A sign of that separation is we can enjoy lives of infinite desire on a planet of finite resources. But to sustain our consumer morality we must expand our empire and seize the labor and fuel of the globe. American Exceptionalism becomes imperialism that justifies itself with guilt. We will save the world from itself.

Former Secretary of State Madeleine Albright said, “If we have to use force, it is because we are America. We are the indispensable nation. We stand tall. We see farther into the future.” Her statement is the very core of American ideology. The world is blind and we are burdened by the vision of what must be, of the U.S. as an eternal force beyond the reach of time.

The Right’s use of American Exceptionalism is well known but it’s a tradition of the Left as well.The war is a disaster but like many people, I wonder if we should leave now or later.A recent poll says over 70 percent of Shiites and Sunnis in Iraq want U.S. troops to leave immediately but I struggle with guilt, with my reluctance to give up American Exceptionalism.

Democrats haven’t given up on it. They invoke the rhetoric of responsibility to demand we wait until Iraq stabilizes before leaving. Former presidential nominee Sen. John Kerry and Rep. John Murtha, a Vietnam War vet, offer us “strategic redeployment” a pull back but not a pulling out. The Democrats have found their voice and it is an echo of the past.

If we leave, it’s not destruction of Iraq that terrifies us but the reality of our failure, of the limits to our exceptionalism. If our imperialism fails the “American way of life” it protects ends and we can no longer consume endlessly, we return to the finite world of limited resources the rest of the world lives in.

When Colin Powell warned Bush on Iraq, “If you break it you own it,” he tried to give the president a sense of responsibility. Now his warning has become the administration’s excuse for staying. We own Iraq and are responsible for its future. If anything, history shows us no nation can own another but Imperial guilt is useful as the last guise of power.

We are told if we leave blood will soak the streets red. The civil war will intensify and tear Iraq apart as the rivalries between Shiite and Sunni, Arab and Kurd are settled with the flash of gunshot and the swing of a blade. Women will continue to be locked inside homes and veils.

If we leave and the blood runs, Iraq will fade as the media loses interest. It’s happened before. We lost interest in the 300,000 Iraqis we’ve killed since the war began. Clinton aside, we don’t “feel your pain.” We are numb to the violence done in our name. Iraq’s pain will be forgotten as was the suffering inflicted upon the Vietnamese.

The pain we will acknowledge is the end of American Exceptionalism and the beginning of a history we cannot create or control.

Yet all of this is an empty discussion. The decision to stay or leave is one we will never make. We may get kicked out, but we won’t leave even if Democrats win the Congress in 2006 and the White House in 2008.

We are protecting more than oil; we are guarding our identity as the “indispensable nation” as the ideal that guides humanity. We won’t leave because we are addicted to power and I am addicted to my privilege and for decades to come in the City on the Hill, the lights will be on at night.