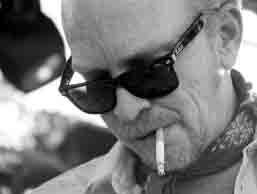 If you had seen Roky Erickson wandering around Austin, Texas around 1990, you probably would have thought he was homeless, a genial old hippie with matted hair, missing teeth, and LSD-fried brains. You wouldn’t have guessed that he was a legendary ‘60s psychedelic-garage rocker, the lead singer for the 13th Floor Elevators, someone who’d played with Janis Joplin and inspired the bands that started the CBGBs scene.

Erickson wasn’t actually homeless. He lived on the outskirts of Austin, surrounded by TVs, radios, and an electronic keyboard all on at once, blaring loud enough to drown out the voices in his head. That’s where You’re Gonna Miss Me, a documentary on his life that previewed here last month, opens.

The 13th Floor Elevators emerged in 1965-66, an amazingly fertile period of rock- ’n’roll—when, under the influence of psychedelic drugs and Bob Dylan, bands were beginning to write more complex lyrics and play more experimental, chaotic music without losing the drive, directness, and structure of the three-minute pop song. “You’re Gonna Miss Me,” the Elevators’ first single and a minor national hit, was a classic of the style, a four-chord riff of the kind that anyone can play but it takes brilliance to write, pushed along by mysterious burbling noises from an amplified jug. “Slip Inside This House,” from their 1967 second album, was an eightminute marathon with lyrics like “Bedouins in tribes ascending/From the egg into the flower,” but the beat never let up. Janis Joplin sang with them for a couple shows before she moved to San Francisco.

The Elevators fell apart after Erickson was busted for pot in 1969. Texas law enforcement was not friendly to countercultural stoners; the year before, Houston black activist Lee Otis Johnson had gotten 30 years for one joint. Erickson, who had already had a nervous breakdown and taken copious amounts of LSD, pleaded insanity. He was sent to an institution for the criminally insane, where he was given shock treatment and Thorazine and played in the house band with three psycho killers.

He came out severely damaged. In 1975, he went to a lawyer to have himself declared “not an earthling,” hoping it would “prove to the person who is putting electrical shocks in my head that I am an alien.” His songs reflected his obsessions with horror movies, evil, and the Soviet Union: “I Walked With a Zombie,” “Two-Headed Dog” (“two-headed dog, two-headed dog, I’ve been working in the Kremlin with a two-headed dog”), and “Bloody Hammer,” a wounded brain’s scream of protest against psychiatric torture. Over the next decade, he played those songs around Texas, backed by bands called the Aliens, the Explosives, and Evil Hook Wildlife E.T., and recorded several albums. Live, they played brilliantly dense, fiery rock- ’n’roll; on record, he mixed in softer love songs and hippiefied acoustica.

In the outside world, his reputation was rising, as nascent punk-rockers unearthed garage-band rock from the dustbin. Television, the group that talked Hilly Krystal into booking rock bands at CBGB’s, covered the Elevators’ “Fire Engine,” and Patti Smith called him an inspiration. He also became a godhead for the Austin music scene and the early-‘90s “alternative” rockers, from Sonic Youth to the Butthole Surfers.

By the late ’80s, though, he had deteriorated significantly. He stopped performing and lived reclusively, cared for by his mother, who didn’t believe in psychotherapy or medication; You’re Gonna Miss Me shows her constructing storyboard collages of family photos, which she says were her attempt to convince herself that she had been a good mother. Sumner Erickson, Roky’s youngest brother and the tuba player for the Pittsburgh Symphony, eventually rescued him, winning an intrafamily court dispute over his care.

2005 was the year of Roky’s public resurrection. The I Have Always Been Here Before best-of collected 43 of his songs from 1965- 1995 onto a double CD. He resumed performing too, appearing at the Austin City Limits festival with the Explosives in September. At the end of the set, he looked out at the rapt crowd with a “you really like me” grin. Out at the crowd of middle-aged Austin rockers, two fans who’d flown in from Norway, and one New Yorker who’d fallen in love with the Elevators’ music in a St. Marks Place record store in 8th grade.