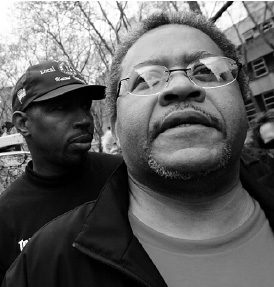 The punishing reprisals that have been carried out against New York City’s 34,000 transit workers for the two-and-a-half-day strike they carried out last December express Wall Street’s ferocious anger and hostility towards this act of defiance. They have also exposed the bankruptcy of the policies and political perspective of unions.

Even before these decisions were handed down by Brooklyn State Supreme Court Justice Theodore Jones, the Metropolitan Transportation Authority (MTA) had already begun implementing punitive individual fines against rank-and-file transit workers for participating in the pre-Christmas walkout. While New York State’s anti-labor Taylor Law, which bars strikes by public employees, allows the docking of two days’ pay for every day on the picket line, in many cases transit workers are seeing substantially more than that taken out of their paychecks.

The jailing of a prominent union official for participating in a strike overwhelmingly demanded by his members and the imposition of draconian fines aimed at crushing their union are measures that have more in common with a police state than a functioning democracy. They are an expression of the intense social polarization that exists in the United States as a whole, and particularly in New York City, the center of finance capital and home to the world’s greatest concentration of multimillionaires and billionaires.

The transit strike – the first in New York in 25 years – was provoked by the MTA and both the state and city administrations with the aim of imposing drastic cutbacks to workers pensions, health care and other benefits. Their clear intention was to take on and defeat this militant section of the working class and then use it as a precedent to carry out even bigger attacks on other sections of the workforce. Behind the public officials stood the Wall Street banks and the major corporations, all of which are demanding that wages, benefits and rights won by earlier generations of workers be rolled back or eliminated as unacceptable impediments to profit and the personal accumulation of wealth by the top one percent.

Transit workers defied these demands by walking out. When the union leadership negotiated an alternative concessions agreement in the aftermath of the walkout – including openended increases in employee contributions to healthcare benefits – transit workers demonstrated their anger by narrowly voting down the package. Using the threat of binding arbitration to intimidate the opposition, the union organized a re-vote on the same pact, this time achieving its passage in a ballot counted April 18. The MTA, however, has dismissed the vote as an “empty gesture,” insisting that the old offer is no longer on the table.

Anger among rank-and-file transit workers is now directed at both the MTA and the union leadership, which has largely ignored protests from its members over the excessive individual fines. In court proceedings, Local 100 estimated that barely 12 percent of its members would voluntarily pay dues if the check-off were suspended. When a similar suspension was imposed during the 1980 strike, the union was brought to the brink of bankruptcy before the check-off was reinstated.

The transit strike exposed the inadequacy of the trade unions as means of organizing any serious social struggle as well as the venality of their leadership. The TWU’s own international president branded the strike an illegal walkout and demanded that workers go back to work as scabs. As for the socalled labor movement in New York City, it did nothing to support the transit workers, organizing not even a single demonstration on their behalf.

The Local 100 leadership itself had no perspective for mobilizing the strength of the working class to defeat the ferocious attacks of the state, city, the courts and the media. To the extent that it had a strategy, it was the vain hope that the Democratic politicians whom it has supported would come to the union’s aid.

This proved a fatal error. The Democrats have been full partners in the attacks on transit workers. The prosecutors who went into Judge Jones’s court seeking fines and jail sentences were working under the orders of state Attorney General Elliot Spitzer, who is the Democratic Party’s nominee for governor in the 2006 election.

In the course of the strike, Spitzer’s spokesman dismissed Republican criticism that he had failed to sufficiently condemn the walkout, declaring that the attorney general had “obtained some of the strongest measures ever imposed and we continue to seek additional penalties. Our actions speak for themselves.”

According to the New York State Board of Elections, Spitzer was the beneficiary of $4,000 in TWU donations to both his races for attorney general and another $3,500 so far to his gubernatorial campaign fund.

Democratic Senator Hillary Clinton tacitly backed the strikebreaking, declaring herself “neutral” in the confrontation between the MTA and the TWU, while reaffirming her support for the Taylor Law.

According to the US Federal Election Committee, the transit workers’ union political action committee has donated some $11,500 to the “Friends of Hillary” campaign fund between 2002 and the beginning of this year, with the biggest donation – $3,500 – going to Clinton last January, just weeks after workers had left the picket lines.

Thus, the union bureaucracy is funding politicians who have organized or supported strikebreaking, helped jail the union’s own president and engineered the fines that are robbing workers of their pay for the “crime” of fighting to defend their rights. If it has trouble getting workers to voluntarily pay dues that are used to make such donations, it should hardly come as a surprise.

A longer version of this article originally appeared at wsws.org. Bill van Auken is the Socialist Equality Party candidate in New York for the U.S. Senate.