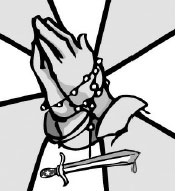 Salon reporter Michelle Goldberg’s new book Kingdom Coming: The Rise of Christian Nationalism is a timely expose detailing the growth and prevalence of what she calls “Christian Nationalism” in government
and society. Goldberg shows how the Christian right has become a powerful force with taxpayer money by securing “hundreds of millions of dollars in government grants for itself, thanks to Bush’s Faith-Based Initiative.”
Arguing that “a populist movement needs an enemy,” she hones in on how “homosexuality has become the mobilizing passion for much of the religious right.” Goldberg recently visited a journalism class at the New School and discussed the cult-like qualities of the Christian right, how it operates and is trying to reshape the whole nation through “dominion theology.” Goldberg comes to the issue through investigative reporting on the “ex-gay” movement, which argues that homosexuality is a choice (or a mental illness), and therefore can be altered. She traveled around the United States to give an inside account of the Christian right’s base in megachurches, schools and exurbs.
She attended an ex-gay convention in Los Angeles and profiled a group of gay men living in a Northern California “rehab” center that promised to “cure” them. While warning of the religious right’s agenda to dominate politics, society and culture completely, Goldberg expressed some sympathy for their foot soldiers. “My heart opened up for these people. They lack security and family values. All they want is a safety net.”
The book reveals how adherents of the dominion theology think they have the right to rule nonbelievers. Gays, urbanites, foreigners, intellectuals and religious minorities are all a threat to this totalitarian populist movement. “This doesn’t mean,” says Goldberg, “that nonbelievers will be forced to convert. They’ll just have to learn their place.” Goldberg also underscores the hypocrisy of the Bush Administration, pointing out, “It makes no sense to fight religious authoritarianism abroad while letting it take over at home.”