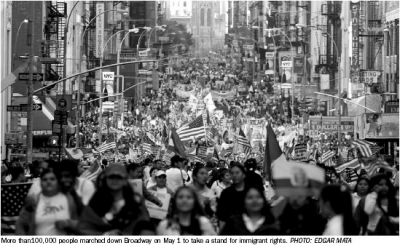 Iwork at a Brooklyn bakery where the kitchen staff is mostly Mexican and Ecuadorian men while the retail staff is largely young, Americanborn women with other jobs or school on the side. There is a clear divide not just in our language or music or work
schedules but, also, in the set up: we are the “face” of the store, but the men in the “back” do the real work that makes the store run. We always find ways to lighten the mood and to get along. The guys will hide behind stuff and jump out and scare us on our way to the bathroom, or they’ll call us niñas (little girls) while we’ll call them niños (little boys), debating who is more immature. We’re friends but no one ever talks about the larger political and social system that has put us in the front and them in the back. Sometimes they talk about being tired or we’ll talk about how they work way too hard, but it never
goes beyond that. On April 29, I turned to one of my retail co-workers, Diana, and
asked her what she thought about the nationwide “Day Without Immigrants” planned for May 1. We agreed that it was a great idea, but we didn’t know how many people were going to do it.

Without us really thinking it through, Diana, who speaks Spanish, went to ask one of the men about it. One guy said he really wanted to do it but the others were worried about losing a day’s pay or even being fired. Something really struck us and things just spiraled from there for the rest of our shift.

We talked to some of the other kitchen workers and they repeated their concerns about being fired. Diana and I decided to call the other retail workers who were on shift for Monday, May 1 and ask them if they would stay home if the kitchen staff needed them to. While there was some confusion at first, they all agreed that if this was going to help
the kitchen staff then they would do it. We reported back to the kitchen staff that everyone in retail would stay out of work if they would also. They looked shocked. We were talking mostly with two guys, Juan and Pedro. Juan looked at us very seriously
and I could tell that he didn’t really trust that it would happen. Pedro smiled big and I felt like we were in on something together. Our group talked in circles for a while about the action, with no one really wanting to admit that it was going to happen.

For the first time in the three years of working at the bakery, we were all interacting with each other with our real emotions and together trying to find a way to make this happen.

Finally, Juan and Pedro approached John, who is the highest ranking person in the kitchen and also the closest of any staff person with the owners. One of the most important moments came when Juan was explaining in Spanish to John that he couldn’t identify who the leaders were. I could tell that Juan was already worried that he had gone too far and might lose his job even if the shutdown didn’t happen. Mostly, we all felt nervous because we agreed that our bakery is a pretty good place to work and that we like the owners. So this was not a strike against them but against the system.

Finally John agreed to call the owners. He said he was just going to say that all the kitchen and retail workers had informed him they weren’t working on Monday because they needed to go to the immigration rallies. The owners were upset, but John made our decision sound so concrete and matter-of-fact that they couldn’t really do anything other than figure out how to cancel some orders for Monday and make sure things didn’t go to waste while the store was closed.

When we returned to work on May 2, one of the owners said we should have given more notice so they have planned for the shutdown but that they understood why it was so important to us.

Among all my co-workers, there was a nice feeling of comfort and support that I hope doesn’t fade.