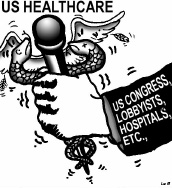 As healthcare costs continue to grow, employers are slashing benefits and adding to the ranks of uninsured. George W. Bush’s prescription is to implement a series of market-based initiatives aimed at further privatizing health care.

But in the opinion of Rudy Mueller, an internist with a rural practice in Jamestown, New York, privatization is the problem. He says bluntly, “Markets kill people.”

Mueller is the author of As Sick as It Gets, a scathing critique of healthcare in America, and a member of member of Physicians for a National Health Program (PNHP), a 14,000-member group that has been pushing for nationalized health insurance since 1987.

“I had a 53-year-old man with no health insurance. He had chest pains. He waited three days to go to the hospital. He died,” said Mueller, as he recounted a list of his patients who had been killed, permanently disabled or almost died due to a lack of insurance. “The people who are the most likely to get sick in society are the elderly and the poor.”

Not having health insurance means you’re more likely to get sick. It also means your likelihood of dying is 10 to 15 percent higher than those with insurance.

Billie Spaight, who lives in Queens, knows the perils of being uninsured. Her husband suffers from epilepsy and had to wait six months to get coverage under his employment insurance. She says one day he “had a seizure at work and had to have stitches.” Spaight says he was unable to see a neurologist until her mom gave her $600. “We had
to bring that in cash just to get to a neurologist to get a medication adjustment.”

Spaight is a member of Health Care-Now!, a coalition of groups including PNHP, the United Steelworkers and the United Methodist Church, which are building support for H.R. 676, a healthcare reform bill that was introduced in 2003 by John Conyers (D-Mich.).

The plan, which currently has 68 co-sponsors, would institute a “single-payer” national program that would extend a more generous version of Medicare to all Americans and convert the for-profit healthcare industry into a not-for-profit system over 15 years. Funding would come from taxes for existing programs, a 3.3 percent payroll tax on employers, a five percent tax on the top five percent of earners, as well as a tax on all stock and bond transfers.

Group advocates are quick to clarify that it would not be nationalized medicine; doctors wouldn’t be working for the government, just paid by them. “What we’re suggesting is Medicare for all,” said Marilyn Clement, the executive director of Health Care-Now!. “Very enhanced, improved Medicare that provides much, much more.”

The High Price of No Prevention

The cost of a dysfunctional healthcare system can be found in hospital emergency rooms across the country, which are used increasingly as a stopgap for the 46 million uninsured.

At BryanLGH in Lincoln, Nebraska, 38 percent of emergency room visits are for nonemergency reasons.

Tom Hoover, an 11-year veteran nurse of emergency rooms in Lincoln, warns that “hospitals will end up closing their emergency rooms because of those percentages of people who don’t have insurance and can’t afford to pay.”

“Healthcare costs are out of control, the largest majority of that is because of underinsured or non-insured patients,” said Hoover. “We want to reduce those costs, thus decreasing the costs for everybody [by] getting the [uninsured] to a primary care physician that knows them.”

Per capita, Americans spend more on healthcare than citizens in any other country – $6,280 as of 2004. Meanwhile, the U.S. system is one of the worst in the developed world, ranked 37th in 2000 by the World Health Organization.

In 2004, Government funding covered 42 percent of healthcare expenses, through programs such as Medicare, Medicaid and the Veterans Administration. Out-of-pocket consumer spending (not including premiums, which are considered part of the insurance industry’s contribution) accounted for 15 percent, while private insurers covered about 40 percent.

“In general I support [a single-payer system], because I see it working,” said Dr. Alec Pruchnicki, a doctor of geriatrics and a member of PNHP. “The government pays the bills. The government doesn’t run my practice I know the rules; I don’t have to guess as to what’s going to be covered and what isn’t. So I can run my practice fairly efficiently and easily.”

Pruchnicki has been a primary care physician to 125 seniors at the Lott Assisted Living Facility in uptown Manhattan for two years. Since Pruchnicki began providing onsite care to residents, the number of hospital days and hospitalizations have been decreased by 41 percent and 35 percent, respectively, without an increase in deaths or transfers.

“The whole idea… is that you provide primary care and you prevent worse things from happening,” he said.

Even for those with health insurance, the costs can be enormous. John Knapp works at an industrial battery charger plant in Lincoln and takes home about $18,000 a year. With a pre-tax deduction of $130 every two weeks, a deductible and co-payment, he can wind up paying $5,000 a year for healthcare.

With his wife in need of medical care, however, Knapp is happy just to have coverage. He became involved in the Health Care- Now! movement after realizing how difficult it is to get insurance. “Having a job with insurance didn’t come easy by any long shot. An employer I use to work for had insurance for me but not for my wife, due to the pre-existing practices of the insurance companies,” he said. “Later, [when] my wife became insured through Medicaid. I had to watch what I earned.”

As healthcare costs continue to increase, rising to 16 percent of the gross domestic product or $1.9 trillion in 2004, premiums are rising and employers are cutting back or eliminating benefits altogether. In 2004, employer-based premiums soared 11.2 percent, five times the rate of inflation. Five million fewer Americans had employer coverage
in 2004 than in 2001, as employer coverage declined from 65 percent to 61 percent.

Keeping his promise to promote a more “consumer-driven” healthcare system, President Bush’s 2007 budget freezes funding for children’s health programs, and eliminates $35 billion in funding for Medicaid and $116 billion for Medicare over the next decade.

The idea is that by offering equal tax incentives to individuals and employers, the plans will take the burden off the employers to provide insurance, while lower premiums coupled with high deductibles will allow more people to afford coverage. Because contributions, investment growth and withdrawals for health-related expenses are all tax free,
this makes them more beneficial than Individual Retirement Accounts, where taxes must be paid either before contributing or after withdrawal.

To qualify for an HSA, you must first purchase a high-deductible health plan (HDHP), otherwise known as a “catastrophic” plan. For 2006, these plans will have a minimum deductible of $1,050 for an individual and $2,100 for a family. Under Bush’s proposal, a family would be able to deposit up to $10,500 a year into a health savings account.

Tax Shelters for the Wealthy

Yet critics say these plans are really investment vehicles for the wealthy. Few Americans can afford to put thousands of dollars a year into HSAs. Even if they do, the cost of a chronic illness would quickly wipe out the savings, leaving policyholders to fall back on the “catastrophic” insurance policies that tend to cover less, relegating more expenses to
the policyholder.

Everyone else will be forced to seek out traditional coverage in a shrinking insurance pool. The Center on Budget and Policy Priorities estimates that the President’s HSA proposals will motivate employers not to offer traditional health coverage, leaving another 600,000 people without coverage.

“It’s going to take the healthy and wealthy out of traditional insurance pools,” said Olveen Carrasquillo, who is an Assistant Professor of Medicine and Health Policy at Columbia University and the Director of the Columbia Center for the Health of Urban Minorities. He is also on the steering committee for Latinos for National Healthcare Coalition, which formed in 2005 to work with Health Care-Now! to lobby Latino lawmakers into supporting H.R. 676.

“When you have a lot of people leaving the private insurance sector, you’re going to have the sick staying in these traditional plans. Premiums are going to go through the roof.”

The Tipping Point
Currently, Health Care-Now! is trying make healthcare reform into an electoral issue by holding Citizen’s Congressional Hearings across the country. They hope to create a “groundswell” of local support that will galvanize politicians into passing H.R. 676 by 2008.

“If your congressperson is not responsive to the issue of healthcare for everybody, then start looking for a new one,” said Marilyn Clement. “Nothing can happen as long as the Republicans are in control,” said Clement. “It can’t be discussed. Nobody will put it forward for a hearing.”

For more info, go to healthcare-now.org