Taken from a well-known chant that is shouted during the Puerto Rican Day Parade by crowds of people parading up the streets of Fifth Avenue, Yo Soy Boricua Pa’ Que Tu Lo Sepas, documents the history,
culture and struggles of Puerto Ricans on the island and in New York City. The film, which
recently appeared at the Tribeca Film Festival, marks actress Rosie Perez’s debut as a director
and comes just in time for this year’s June 11 Puerto Rican Day Parade.
The documentary interweaves the stories of Brooklyn-born Rosie, her family and other Puerto Ricans from New York City. At the heart of the film, Rosie seeks to explore the unavoidable question, “Why are Puerto Ricans so Proud?”
While the film concentrates on some of the most important events, politics and figures in Puerto Rican history, such as the conquest of the Taino Indians, the original inhabitants, the life of early 20th century independence leader Pedro Albizu Campos, and the U.S. occupation of Vieques, one can also learn
about Spanglish, the significance of Casitas, and what are Cuchifritos. In a very natural sense, the film is filled with humorous moments, vivid images of flying flags during the Puerto Rican Day parade and footage of Rosie as she travels to her ancestral home of Aguadilla, Puerto Rico.
This documentary is a great introduction to Puerto Rican culture and history for those unfamiliar with it. The film will air on the Independent Film Channel on June 12 and 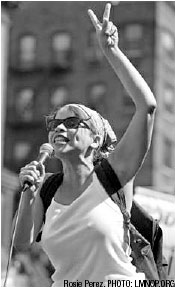 will be screened at the University of Puerto Rico during the coming weeks.
Copies of the film will be provided to teachers upon request to IFC Television, www.ifctv.com
PHOTO: LMNOP.ORG