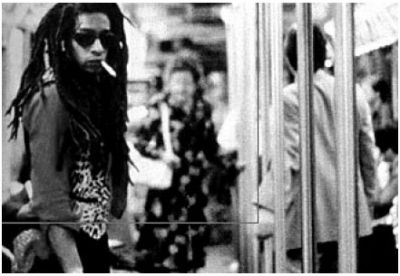 If your style is more incendiary revolutionary than flag-waving patriotic then make your way down to the Second Annual Afro-Punk Festival being held at the Brooklyn Academy of Music over the July 4th weekend.

This year’s festival features great documentaries like Negroes with Guns ( a biography of Robert F. Williams who initiated armed defense of civil rights workers) along with a retrospective featuring the films of Don Letts director of the cult classic Dancehall Queen.

The crown jewel of the festival is its namesake, Afro-Punk. The 66-minute documentary directed by James Spooner focuses on Black kids who embrace punk’s D.I.Y aesthetic. Featuring bands like Cipher, Honey Child and Tamar Kali, Afro-Punk is reflective of the growing influence of the black rock sound as evidence by the band TV on the Radio and the sonic-noise on Mos Def’s CD The New Danger.

“More and more musicians are embracing a hardcore sound,” says Jeremiah Hosea, bassist for a number of acts including Earthdriver and Tamar Kali. “I think there are linkages between the rock acts and hip hop performers.”

While Afro-Punk has won critical acclaim on the festival circuit, its success is linked to its grassroots fan base. Afro-Punk has spawned Liberation sessions, bimonthly showcases of talent, in New York featuring underground rock acts, while the Afro-Punk website has created an international community.

“It was such a beautiful experience to go to Liberation sessions and see a sea of Black faces who GET it – who get that our creativity is limitless and doesn’t have to be boxed into R&B or hip-hop or whatever other label the music moguls come up with to define us for their benefit.” says Onome, a performance artist and songwriter who is promoting Afro-Punk at shows throughout the city.

Despite rock’s origins in African-American culture, present-day Black rockers stand out and are often slighted in their own community. This “pink poodle effect” can be linked to the overarching influence of hip-hop, not only as the music of choice but the defining experience of Black people, particularly by MTV and BET.

“Afro-Punk as a concept is embodied by Black people who openly embrace the facets of their identity and reject the status quo’s categorizations/stereotypes of Black people and culture” observed Onome. But what about keeping it real? “I’m always bringing the funk while bringing the rock” says Hosea “When I’m on stage I’m proud to be playing this Negro-music.”

This year’s Afro-Punk Music and Film Festival will take place in multiple venues from June 30 to July 4. Things get started with DJ Spooky and Letts spinning at Southpaw in Brooklyn. On July 1, there will be an Afro-Punk album release party at CBGB’s featuring Cipher, Tamar Kali, Slack Republic and Cutlery. Films will be screened at the Brooklyn Academy of Music, including a series of such classic and new documentaries as Paris is Burning, Finally Got the News and a preview of Spooner’s new film White Lies Black Sheep.