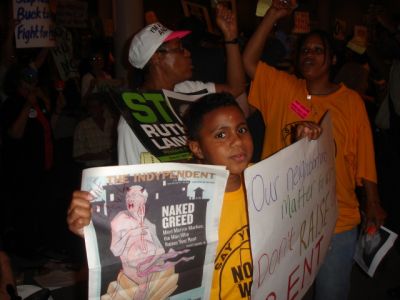 At a sleepy June 1 Rent Guidelines Board (RGB) meeting, a few tenant advocates sat idly while the board’s two tenant members made a resolution in support of home rule. Though Mayor Bloomberg is tepidly against the issue – restoring power over rent and eviction laws to city council – no one could foresee how the mayor’s appointed board chairman Marvin Markus would react.

Tenant groups claim home rule is essential to solving the housing crisis because city council members are more accountable to tenants than state lawmakers.Preparing to give testimony in support of home rule, tenant lawyer and former RGB Executive Director Tim Collins approached the nine-member board when landlord representative Harold Lubell commented it was inappropriate for the RGB to take policy positions. “Make your motion,” Markus said to the board’s tenant members. Markus then did a roll call to vote the home rule resolution down.

The four public members dared not to buck Markus because they are mayoral appointees. Collins then muttered to Lubell that he supported past RGB resolutions on landlord hardships, prompting Markus to bark, “Be quiet you!” Collins rebutted, “This is a disgrace to the democratic process.” That triggered Markus’ tirade against the lawyer Collins. “What do you know about the democratic process?” When Collins asked if the public meeting was being recorded, Markus went ballistic, “Get the fuck out of here! If you want to sue us, so sue us!” Markus’ dropping of an f-bomb marks the opening of rent season.

Later this month the city Rent Guidelines Board will meet and undoubtedly raise the rents for New York’s more than 2 million rent-stabilized tenants. I say “undoubtedly” because the outcome is never in question. The RGB always raises your rents even in the face of stagnating tenant incomes, soaring landlord profits and poor housing conditions for lowincome renters.

Each year, the tenant representatives propose rent freezes, pointing out the city’s obvious affordability crisis, but the board votes them down. The landlord members propose ridiculously high increases, and they are voted down too. Then Markus and the public members play the “reasonable middle ground” and vote in rent increases that are lower than the landlord representatives’ proposals, but still steadily price people out of the city. Housing groups and tenant lawyers criticize the RGB’s yearly decision to raise rents based solely on landlords’ operating costs such as labor contracts and fuel, saying the board never takes into account tenants’ ability to pay the rent. Renters’ incomes dropped 5.6 percent from 2001-2004 after inflation, and rent-stabilized tenants’ incomes dropped 8.6 percent in the same period. Thus, even this year’s proposed increases, which will fall somewhere between 3 and 8.5 percent, could threaten thousands of tenants with the prospect of losing their homes. Let’s meet the RGB members.

Chair (Public Member)
MARVIN MARKUS
Term length: Serves at pleasure of Mayor
Known to tenants as “Marvin Markup,” Markus works at Goldman Sachs as a managing director and investment banker in municipal financing. He earned his nickname as chair of the RGB in the early 1980s, when it raised rents an astronomical 11 and 14 percent at a time when arson was the landlords’ preferred tool to deal with ailing apartments. Markus is rumored to have orchestrated the ouster in 2006 of Martin Zelnik, who voted for a rent freeze last year.

Public Member
BETTY PHILLIPS ADAMS
Term length: 4 years
Term ends 12/31/2006
Betty Phillips Adams incurs the ire of tenants because unlike the other “public members,” she gives lip service to the affordability crisis and has a social services background, but then votes for rent increases without missing a beat. Adams often looks uninterested during meetings. She is currently president of the Metro-Manhattan Community Foundation and does management consulting for non-profits. Prior to that, she was president and CEO of the Jackie Robinson Foundation for almost 10 years.

Public Member
GALE D. KAUFMAN
Term length: 4 years
Term ends 12/31/2006
Gale Kaufman is the most overtly pro-landlord public member. Behind the scenes she is known for her snide comments and arrogance, and can throw a hell of a tantrum. She once pitched a fit during a tour tenant advocacy groups gave of distressed buildings: When her van pulled up to a building in the Bronx, Kaufman spied a throng of reporters and refused to budge from her seat. She did not want to be put on the spot about bad conditions in buildings and how she invariably will vote for rent increases. She is the managing director at Duvernay + Brooks LLC, a real estate finance and development firm.

Public Member
JONATHAN L. KIMMEL, ESQ.
Term length: 3 years
Term ends 12/31/2007
Kimmel is new to the board. Tenants had hoped he would take up the position held by Martin Zelnik, the most responsive public member to tenant concerns. But it appears that he will march in lock step with Markus; so far, he’s voted with Markus on the range of rent increases and against a home rule resolution. He is currently of counsel at Sanders & Deconinck, LLP. Prior to that, he worked for 14 years as legal director of the city teachers’ retirement system.

Public Member
LESLIE WRIGHT, ESQ.
Term length: 2 years
Term ends 12/31/2006
Leslie Wright, the other new member, has
not made much of an impression because
she has rarely engaged tenants or tenant
advocates on issues. She comes off as the consummate paper-pusher that one would expect from someone who works on “complex real-estate transactions.” Leslie Wright is a Senior Associate at Marcus Attorneys, where she specializes in complex real estate transactions involving the creation of multitiered financing structures for nonprofit organizations.

Owner Representative
HAROLD LUBELL, ESQ.
Term length: 2 years
Term ends 12/31/2006
Lubell is known for shaking his finger at tenants while chiding them that the RGB is not a welfare agency. He enjoys the crotchety old-man shtick and could play billionaire Burns in an off-Broadway production of The Simpsons. When tenants demanded rent freezes last year, Lubell snarled back about rising landlord costs, using Bushesque logic to argue for rent increases, “It’s for your benefit and the board’s benefit.” He is a partner at Bryan Cave, a massive corporate-law firm.

Owner Representative
STEVEN J. SCHLEIDER
Term length: 3 years
Term ends 12/31/2007
Steven Schleider is the other landlord representative. He also votes and argues for high rent increases. He is an appraiser and the president of Metropolitan Valuation Services, Inc. He has over 25 years experience in real estate.

Tenant Representative
ADRIENE L. HOLDER, ESQ.
Term length: 3 years
Term ends 12/31/2007
Holder, a Legal Aid attorney, is the more active and vocal of the tenant representatives. Both she and David Pagan introduce rent freezes each year that are invariably voted down by the public members and landlord representatives. Holder is the only renter on the entire board. Earlier this month, she tried introducing a home-rule resolution, which was the impetus for Markus’ enraged outburst.

Tenant Representative
DAVID PAGAN
Term length: 2 years
Term ends 12/31/2006
Pagan is the less active tenant representative on the board, but can be counted on to back rent freezes and home rule. He is the longtime executive director of Los Sures, a nonprofit community-development organization in Southside Williamsburg.
Tenants can testify at the RGB community hearings June 19 at Hostos College in the Bronx and June 22 at Cooper Union by calling 212-385-2934. The final vote on June 27 at Cooper Union will surely be rowdy.
Bennett Baumer is an organizer for the Met Council on Housing.