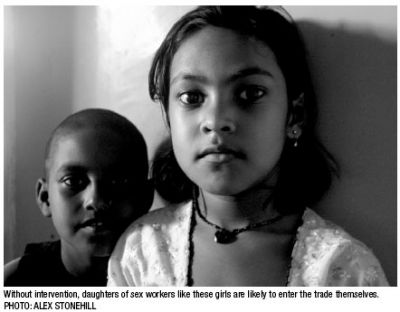 KOLKATA, India—The smells of jasmine perfume, fried food, bidi smoke, and liquored breath mingle in the thick humid air. Watery pink and white neon lights from the Hotel Welcome, Dream House and Love Lotus shine in the eyes of women lined up in turquoise saris or red miniskirts and the customers jostling to admire them. Backlit in shadowy doorways, young girls beckon into the night with childish voices that betray their pre-pubescence, despite alluring gestures and deep purple lipstick.

Suddenly the mood shifts here in Sonagachi, Kolkata’s largest red-light district, as an angry chant rises from the far end of the narrow street. The girls scramble to cover their faces with flimsy scarves and pimps in lungis and tank tops rush to their sides as thousands of women round the corner. Illuminated by torches that billow black smoke into the inky sky, the women stride forward with arms linked and scream, “We demand sex workers’ rights!” and “George Bush, you can take our funds but you cannot take our fight,” as they hold high a straw effigy of Bush.

The tradition of Kolkata sex workers taking control of their lives is as old as its first redlight district. Five miles away, in the slums surrounding the Kalighat temple, one of the holiest sites in Hinduism, lies the birthplace of the city’s sex industry. Hundreds of years ago, widows and other socially outcast women would migrate here hoping for room and board from temple priests. While they were given a little food and a place on the floor to sleep, resident priests and upper-caste men who visited the temple often required sex as payment. Recognizing that demand for sex far exceeded the returns they received, these women began a community alongside the temple and started charging for their services, and organized prostitution was born.

While media attention on sex work in Asia often focuses on underage trafficking and slavery, it is more subtle social factors that push many women into the trade. The fight for legalization of prostitution as a means to expose trafficking, as well as improve the lives of sex workers, is usually ignored.

“It’s better to have a bad reputation than to be considered virtuous and be beaten every day,” says Arti Pandey, 22 (name changed on request). Her story illustrates how prostitution can be a refuge from abusive families and limited economic options.

At 14, Pandey was married off to a man 20 years her senior who had designs on inheriting her ailing father’s government job and a cut of his pension. When another sister’s husband got the position instead, the abuse began. After learning that her husband was plotting to tie her up and feed her into a fan as retribution, Pandey ran away and began to support herself through a series of nursing and housekeeping jobs. But everywhere she went threats and demands for money followed, and her angry in-laws succeeded in getting her fired from every stable situation she found in Kolkata.

A trip to Mumbai changed the course of her life. There she met a friend who was working in a brothel and encouraged her to do the same. The wages the friend earned along with the promise of meeting interesting foreign men enticed her, and within months she was making a decent living. When a police raid returned her to Kolkata 18 months later, she attempted to resume “legitimate” work in a low-paying garment factory. But her in-laws soon found her out and began insisting that she return to them, for what Pandey saw as a life of further abuse and slavery.

“I realized that if I was going to live on my own I would have to return to the trade,” a move that would sever her ties to mainstream society and by extension the in-laws. “This is one way you can choose to live your life, if you don’t mind the work you can make a good living.”

Last summer Pandey met a former sex worker turned peer educator for New Light, a non-governmental organization (NGO) that provides support for sex workers and their families. The woman helped her find a room, set her up as an independent operator in Kalighat and introduced Pandey to the organization. At New Light’s office in the heart of the Kalighat red-light district, she receives regular check-ups, learns about safe sex practices, gets free condoms and has access to counselors and childcare. Even more important is the sense of non-judgmental support that the community of sex workers centered around New Light provides.

Back in Sonagachi, the Durbar Mahila Samanwaya Committee (Unstoppable Women’s Alliance Committee) is taking a more militant approach to the problems facing sex workers. The organization is made up of current or former sex workers and their families and lobbies aggressively for the legalization of prostitution.

Current law does not explicitly state that prostitution is illegal, but criminalizes solicitation and the running of brothels or renting rooms to sex workers. The Women’s Alliance maintains that any criminalization of sex work reinforces harmful stigmas, creates a black market where child prostitution and trafficking can thrive and promotes a climate where the protection of women who work within the industry cannot be ensured.

A new Indian law under consideration as an amendment to the Immoral Traffic Prevention Act seeks to prosecute the customers of prostitutes. Such criminalization and localized police raids in red-light districts have been linked to a decrease in condom use as the resulting scarcity of customers forces impoverished sex workers to agree to abusive or unsafe sex in order to support themselves.

Another concern is the insistence on language that equates prostitution with trafficking, denying the important role that of-age and by-choice sex workers can play in its eradication. The Women’s Alliance has organized sex workers in red-light districts throughout the state of West Bengal and set up self-regulatory boards to oversee conditions in these communities in an attempt to improve wages and root out child prostitution and trafficking.

The Women’s Alliance is not immune to criticism, and visible child prostitution on the streets that surround its main office is an obvious indicator of the limitations of self-regulation. It is estimated that onethird of the 9,000 prostitutes in Sonagachi are under 18.

The lack of programs to provide exit strategies from the trade does not address the socio-economic forces that lead women into sex work, and an unsettling conflict of interest is presented when the leadership of an organization profits from the business it is attempting to reform and regulate.

Despite these concerns, the Women’s Alliance is the most active and influential sex workers’ organization in West Bengal. The loyalty it inspires is clear in the family-like atmosphere of its offices and the banners and signs carrying its logo that are displayed throughout Sonagachi. Its ability to mobilize thousands of women from one of the most vulnerable sectors of Indian society to march proudly through the streets to demand their rights is proof of the trust the group has earned and the movement it has ignited.

As dynamic as the movement for sex workers rights in Kolkata has become, its success still may rest on outside forces.

The Bush administration has begun to cut funding from international organizations that condone prostitution and don’t promote abstinence as a first defense against HIV and AIDS. The strengthening alliance between the U.S. and Indian governments has sparked fears that Indian laws will move to further criminalize prostitution, and the possibility of diminished international aid looms over projects like the Women’s Alliance and New Light. Now it is not only the stigma of family and social disapproval sex workers must endure, but also the moralizing of a government and people that they will never meet.

For those working on the ground in places like Sonagachi or Kalighat, the first concern is that funding cuts and further criminalization will simply drive the sex trade deeper underground. While the Bush administration has been lauded for its efforts to abolish sex trafficking, organizations like the Women’s Alliance and New Light often provide the only oversight in communities where women and children are being trafficked.

Furthermore, these programs have proven effective in promoting safe sex and slowing the spread of HIV and AIDS. Women’s Alliance statistics report current condom use in Sonagachi at 89 percent and HIV infection rates among sex workers has stabilized at around 5 percent.

“We are the gatekeepers,” says Roma Devnath, supervisor for the Women’s Alliance Anti-Trafficking Project and a second-generation sex worker, “If you eliminate us, then HIV and AIDS will spread to the whole of society. Eventually it will even spread to the society of George Bush himself.”

A longer version of this article appears at commonlanguageproject. net and SpreadMagazine.org