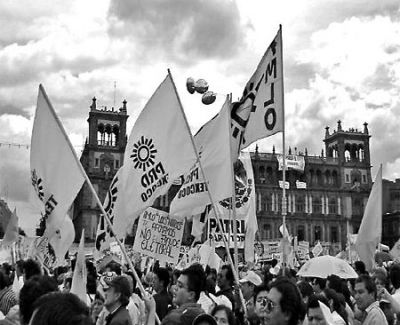 MEXICO CITY—It was July 2, election night, a little before 11pm. While we wait for Andres Manuel Lopez Obrador, the Party of the Democratic Revolution (PRD) candidate, to make his victory speech, Luis Carlos Ugalde, the head of the Election Commission (IFE), appears on massive television screens throughout the room and announces that the election is too close to call.

The next president of Mexico, we are told, will not be named until Wednesday, July 5. The room, full of supporters and press, is suddenly quiet – all one can hear are whispers of “miércoles?”

After a few minutes Lopez Obrador appears and tells the crowd, “We know we won. We are up by 500,000 votes.”

Nearly a half-hour later, the National Action Party (PAN) candidate Felipe Calderón appears on TV, and announces, “There is not the slightest doubt that we have won the election.”

No one realized it at the time, but the stage was being set for a fight that will continue into August – and could even stretch into September.

Two days after the IFE announce the preliminary results, showing Felipe Calderón ahead of Obrador by a meager 0.6 percent. On that same day I met with an Election Commission representative who admitted nearly 3 million ballots from 11,184 polling places had yet to be counted. She wouldn’t say if these ballots would be included in the official count, but was “confident those votes wouldn’t change the outcome.”

The following day, July 5, the Electoral Commission began the official count, not a vote-by-vote count, but rather, an accounting of tally sheets attached to every ballot box.

In the morning, representatives of the PRD gathered at a news conference and asserted that irregularities had taken place throughout the election process. Members of the press pushed the PRD to label it “fraud” but they refused to take that direction, deciding instead to stick to the legal route and play out the process.

Taxi drivers and others I spoke with on the street that day told me they were frustrated the PRD was not calling for mass mobilizations because, as the security guard at my hotel told me, “Calderón is trying to steal it … Everyone knows the PAN committed fraud and we need to do something about it.”

Early in the morning on July 6, the Election Commission announced the results of their tally sheet count: Felipe Calderón was now ahead of Lopez Obrador by only 0.5 percent.

Based on this count, many reporters declared Felipe Calderón the new president of Mexico. Yet, what most failed to mention is that the Election Commission is not the body responsible for officially announcing the next president.

Rather, it is the Electoral Tribunal that will make an official announcement after addressing complaints filed by each party. The Electoral Tribunal, a supposedly nonpartisan, independent body, has the responsibility to examine statements brought to them before making a final decision. It will have to consider issues cited in the PRD’s complaint such as:

• Why hundreds of thousands of ballots have yet to be included in any count; • Why ballots have been found, literally, in the trash;
• Why there was a massive amount of “dropoff,” i.e., where people showed up to vote but did not cast a vote for president;
• Why, on Election Day, poll workers in places like Querétaro and Salamanca were caught on video stuffing ballot boxes and changing tally sheets.
• The use and role of public expenditures on Calderón’s campaign;
• The pro-Calderón intervention of current president Vicente Fox (a member of PAN), which is illegal according to the Electoral Commission’s rules.

Overall, the PRD is citing irregularities in more than 30 percent of the precincts throughout the country.

Based on an optimistic reading of the IFE’s track record in previous smaller elections where it demanded recounts and exposed cases of fraud, the Electoral Tribunal may, indeed, call for further investigation, demand a vote-by-vote count, or even annul the election. But Obrador and his supporters don’t seem to be taking any chances.

Obrador’s constituency includes the indigenous, poor, grassroots movements, businessmen and even former members of the PRI – the party that controlled Mexico for some 70 years. In 1994 he ran for governor of Tabasco but lost after a battle revolving around his opponent’s supposed illegal use of public monies. In 2000 Obrador was elected mayor of Mexico City and quickly became known for policies benefiting the poor. Even last year, Obrador had to fight to get on the ballot. Ultimately, it was his supporters’ willingness to mobilize that secured his spot in the election.

On Saturday July 8, six days following the election, nearly half a million people gathered in Mexico City’s Zócalo, one of the largest squares in the world, for an “informative assembly” organized by the PRD. People of all ages, from as far away as Tabasco, waited for Obrador to address them chanting, “Vota por vota, casilla por casilla.” (“Vote by vote, polling place by polling place.”)

Obrador announced a nationwide mobilization to begin that Wednesday. The crowd, waving the yellow flags of the PRD and holding signs claiming fraud, shouted in response, “No está solo” (”you are not alone”). Obrador called for calm and asked that his supporters not shut down roads (which would cripple the Mexican economy) that, ultimately, they would win together through the government’s own institutions. The next week people began marching from every state in Mexico and an estimated 1.1 million people converged in the Zocalo on July 16 for another mass meeting. Further mobilizations to pressure the Electoral Tribunal were called.

Depending on what happens, Obrador may face two options: Admit defeat or step outside the political institutions altogether, capitalizing on his popular support, to pressure the system. Right now he is balancing between continuing down the legal route and proceeding with mobilizations aimed at pressuring the Electoral Tribunal. If he decides to go outside the system, it could cause political, social and economic paralysis, which, in turn, would mean he would likely have to sacrifice broader support. But he may have to do just that.

Matt Pascarella is a freelance reporter and an award-winning researcher and producer for investigative journalist Greg Palast.