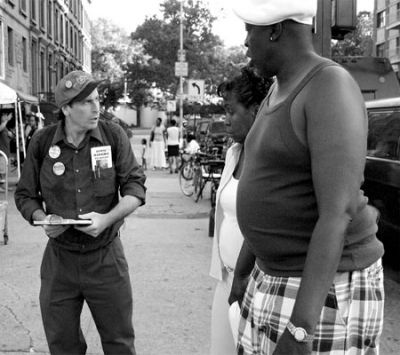 Standing in Union Square on a hot July day, against a tide of disinterested New Yorkers walking through the gauntlet of organic cheese, overwrought colored canvasses, homemade Vermont jam and the quintessential “imagine” tourist photograph, Jerry Kann holds a clipboard and repeats his mantra, “Excuse me, are you registered to vote?”

Most people brush past Kann without a look, some manage a smile, others pepper him with irrelevant apologies, “I’m a Democrat, sorry,” a young woman carelessly calls out. “Not right now,” says a man in shorts and a t-shirt. “Thanks,” and “I’m good” are tossed out by a young man with long black hair and a metal band t-shirt. “You hear that a lot – no thanks – like I’m selling something,” sighs Kann.

In a half hour of petitioning, Kann has garnered three or four signatures. “There’s no such thing as an easy place,” said Kann, who as a volunteer petitioner for the Green Party petitioning drive will spend most of his nights and weekends for the next month soliciting signatures. “For this spot, this is pretty okay,” said Kann. He prefers petitioning at 125th St., or the Bronx. “Generally speaking, …the richer the neighborhood, the worse we’ll do,” he said.

As a third party without permanent ballot status, the Greens are the last group of petitioners to hit the streets this summer, trying to gather the 15,000 valid signatures required to get their “peace slate” of five statewide candidates on the ballot in the 2006 general election.

Jumping into the political arena against the well-oiled political machines of the major parties is not for the faint of heart. Besides contending with the rebukes of New Yorkers, many third party and grassroots primary challengers deal with cumbersome signature protocols and go up against flocks of high-priced lawyers hired by established politicians to comb potential opponents’ lists for wrong addresses, illegible signatures, or a host of other flaws that disqualify the petitions.

The idealism of progressive candidates trying to participate in the electoral system can be quickly dissipated. Claudia Flanagan attempted to run in the democratic primary in 2005 for the city’s 2nd district city council seat. “I thought… if I’m going criticize this stuff, maybe I should be in it, find out,” said Flanagan. Flanagan was one of 11 candidates petitioning for slots in the primary, and said she faced a Democratic Party pushing to elect Rosie Mendez, a gay Latina as the successor to outgoing city councilperson Margarita Lopez.

“Their strategy was a smart one. They wanted to knock everybody off the ballot except three white guys from the northern part of the district, so [Mendez] would look like the populist candidate… going up against the rich white guys,” she said.

Flanagan needed 900 signatures from her district. However, conventional wisdom dictated that in order to withstand a political challenge from Democrats, she would need three times that. But being what she called “a political virgin,” Flanagan only collected about 1000 signatures. She was subsequently knocked out of the race when the Mendez campaign successfully challenged 150-200 of her signatures.

Robert Jereski tried to challenge Carolyn Maloney in a 2004 democratic primary for New York State’s Upper East Side Congressional seat. He collected 2166 signatures. After challenges by Maloney’s lawyers, he came up only four shy of the 1250 he needed. “[It was] not just that they challenged us, they were really haranguing, making a scene, being exasperated,” said Jereski of Maloney’s lawyers. “[The lawyers were] putting pressure on the Vice Clerk of the Board of Elections,” he said.”

When he filed to counter the challenges, his appeal was dismissed on a technicality. “I was obligated to serve [Maloney’s campaign] with the papers,” said Jereski. “I went to congressional office. They wouldn’t [take] the papers. The campaign office … locked the doors. They hid.”

“Almost every time I’ve run locally I’ve been challenged,” said Howie Hawkins, who is now the Green candidate running for Hillary Clinton’s Senate seat. “Challengers tend to throw up all the objections, even if they’re not [valid],” said Hawkins. To get signatures reinstated requires political and bureaucratic know-how. When he ran for Councilor-at-Large in Syracuse in 2003, Hawkins filed an appeal against signatures thrown out by the Board of Elections. “I served the process wrong,” he said. “I did it myself and being a party to the conflict, that’s improper service.” His appeal was thrown out on the technicality.

The best defense against being knocked off the ballot is to rack up a vast surplus of signatures. For anti-war Democrat Jonathan Tasini that meant collecting 40,000 signatures earlier this summer in order to win a place on the September primary ballot. Like the Greens, Tasini needed 15,000 valid signatures. “I think that if we had come in with a lower number, it might have been worth [the Clinton campaign’s] trouble to take a look,” said Stephanie Cannon, Tasini’s campaign manager. “[With] almost three times as many signatures as required, just going by the odds, [a challenge] is not likely to be effective,” she said.

For the Greens, and Jerry Kann, that means more long, hot days soliciting signatures. “If we come in with a petition of under 30,000, they may see it as a possibility to knock it out. If we come in with 40,000, they might not see it as worth it,” said Hawkins. “I’m concerned [the Democrats] may not even want the Greens to offer the opportunity to vote for an anti-war candidate.”

But even getting on the ballot in most cases is a largely symbolic victory. After being disqualified to run as a democrat, Flanagan eventually ended up on the Libertarian ticket, receiving 623 votes in the general election. “I had never run for office before, [I’m] sure I never will again,” she said.

However, Jereski emphasized the importance of progressive candidates staging campaigns. “Whatever the hurdles are, a well-organized campaign can overcome them. Activists should really think about taking an active seat in voting on important issues,” Jereski said. “Even if they lose the election, they’ve had an impact.”