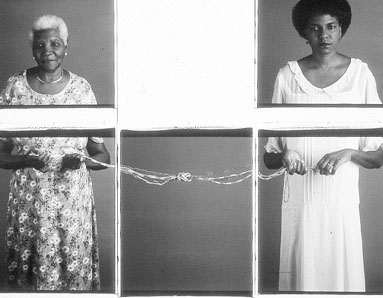 Say slavery in New York and a miasma develops over your listener’s eyes. Isn’t New York the North? Wasn’t it home to Frederick Douglass and abolitionists like Horace Greeley. Yes, New York was a hotbed of opposition to slavery, but it was home to slaves from the Dutch landing until manumission in 1827. Only in recent years has the presence of enslaved Africans been documented at the African Burial Ground near City Hall and more recently, two brave shows at the New York Historical Society, Slavery in New York and Legacies: Contemporary Artists Reflect on Slavery.

In many ways, Legacies is the bridge show of Slavery in New York (now in permanent exhibition.) It is necessary, because despite the strength of the Slavery exhibition, it failed to impart slavery’s meaning for today. Indeed, slavery is a contested terrain. The stories of slaves (or even their names) were rarely recorded, many of the stereotypes such as welfare queens or the violent Black males stem from the portrayal of slaves by their masters. Legacies emerges as a public intervention, allowing Black artists to give breath and meaning to those many thousand gone.

The artists featured in Legacies are playful in their mediums; video, sound, sculpture, and textiles, they have all but abandon painting. They are also historical and globally consciousness, willfully deploying techniques from the African Diaspora.

In “Slave Rape Series” Faith Ringgold’s using a quilt to chronicle the story of Beeata, whose mother resists a rape upon a slave ship. Quilting was traditionally used as a means of communicating escape routes. In this case, it speaks to the fierce resistance by slaves from the slave ship to the plantation. Juxtaposed is Ringgold’s “Fight to Save Your Life.” A pregnant Black woman stands in an emblazoned background, an ax with African headstones in her hand. Her look reverses the gaze of domination and speaks of freedom.

In “Number 25,” Leonardo Drew handcrafted battens of cotton into bales. The towering sculpture is a reflection on the tremendous labor enslaved Africans had put into creating the wealth of this country. Sculptor Lorenzo Pace’s “Jalaini and the Lock” is a meditation on the continued relevance of slavery to future generations that utilizes a lock bequeathed by his enslaved great-grandfather Steve Pace. Behind a white picket fence, the story of the Pace family is told, while just underneath a street sign reading “Centre Street: The African Burial Ground” is hoisted. Pace’s takes on the image of the idyllic home by acknowledging the slaves that lived and labored at the beginning of this city’s history.

It’s important to note the use of irony and sarcasm through the show. While slavery is no laughing matter, irony in this case is used for its distancing effect. It allows the viewer to engage with a painful memory while creating space for critical reflection. In Kara Walker’s “Emancipation Approximation” there is a group of silhouettes of slaves and masters. While initially it appears pastoral (something out of Gone With the Wind) a closer look reveals deeper sexual intrigue: a master lusting after his slave. A similar dissembling effect is used in Betye Saar’s “Leader and Equality.” The Aunt Jemimah figure, traditionally seen as servile to white desire, is recast as a militant armed with a shotgun.

Willie Birch’s “Memory Jug of Uncle Nat” and “In Search of Warriors” mine both found art and West African cosmology. “Memory Jug” is a cast iron jug with nails driven inside of it. Traditionally, iron nails driven inside the sculpture acts to release the energy from that work of art. Similarly, “In Search of Warriors” shows a suit sewn with seashells and pieces of glass. Both glass and seashells were used on burial plots in the South. It was believed that reflective objects allowed the living to communicate with the deceased.

Legacies’s strength lies in the artists’ ability to take from the past to speak to the present. As the first “contemporary” show, the New York Historical Society is showing history that truly matters.