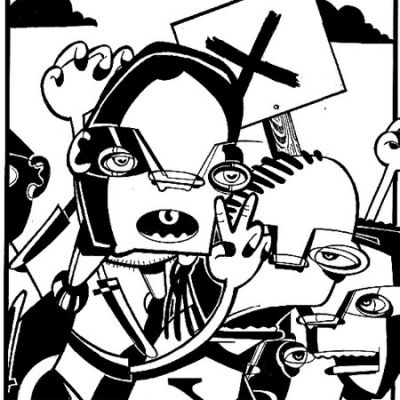 On June 10, I watched police tackle a man with dreadlocks on Nostrand Avenue. He was handcuffed amid an angry crowd. I parked my car and jumped out looking for answers. My reporter’s notepad flashed in my hand, it is my shield and mirror, protecting me from commitment to a side while reflecting the consequences of those who take one.

On opposite sides were the police and people of Bed-Stuy. The former enforce minor laws in the name of quality of life and the latter can’t afford a life of quality. The new cafes on Fulton and the houses for sale on Gates are for those moving in who can afford them. Those who can’t are pushed by the line of gentrification that is guarded by the police.

The trouble had begun before I arrived, when another Black man, 22-year-old Zackary Ballard, had been arrested for, it seems, being on the wrong side of that line.

Ballard’s father, Zachary Kitt, told me he asked why they were taking him and his son said, “I don’t know, Daddy.”

An officer told him, “There is a warrant on his car.” The father answered, “That’s my car. If there is a warrant arrest me not my son.” The cop cut him off, “You had a one-shot deal to talk to me.” Hardeyed spectators watched.

In Bed-Stuy a young Black man in custody can be a martyr because his crime, whatever it is, cannot outweigh history. The cops walked Ballard against a backdrop of collective memory in which white men with guns and badges drove Blacks to jail or to their death. What came next confirmed for the crowd that police abuse power. They sped away with no lights or siren and rammed a Hyundai with two people inside into a deli. Ambulances came and took everyone but a crying female passenger still in her seat. People surrounded the crumpled cars.

“There was a guy with dreads who had a cell-phone camera taking pictures,” said 35-year-old Regina Ford. “He was saying, I got you motherfuckers on film. That’s when things got rough.” She said NYPD vans drove in and men with shotguns and dogs ran out, shoving people to the sidewalks.

A whirlpool of violence spun along Nostrand. That’s when I drove in. Panic and rage blinded everyone in the confusion of punches and shoving. The cops pushed us back and we stood holding anger in our fists. A woman stomped her foot, “It aint right how they did him!” as police gripped their batons and stared across the thin yellow line. Nearby, a man blasted a Malcolm X speech on police brutality from his boom-box.

”I’ve seen this before,” said 65-year-old Lee Guest. “They race around our streets endangering people.” He gave me flyers showing guns and a plea to “Stop the Shooting.” Before he finished, a lanky man ducked under the police line and jogged down the street. Cops wrestled him down. “Yo! He’s just trying to see his family,” someone yelled.

An older man leaned on his Pan-African walking stick, “Better not be a scratch on ’em!” Young men slapped hands and laughed nervously to prove they were not scared but the danger was over. All they had left was bragging rights.

Djibril Toure of the Malcolm X Grassroots Movement said police over-reaction is policy: “It’s no coincidence that the High Impact Zone overlaps Nostrand Avenue,” he said, “You have poor people living in the path of gentrification and police using zero-tolerance tactics. It’s the perfect storm.” Walking away, I saw flyers with the plea to “Stop the Shooting” stamped by footprints into the gutter.

I drove to the 79th Precinct. The man who took pictures with his cell phone limped out. He was circled by politicians, dread-locked activists and Nation of Islam members. I asked Councilman Charles Barron about the riot. “There was no need for the shotguns or canines or the helicopter,” he said, “the best thing [the police] could have done was leave quickly.”

I got in my car and my phone rang. It was my friend who recently got a job. “Do you know of houses for sale around you?” He asked. “At this rate” I said, “you can stand outside and take your pick.” I put down my reporter’s notepad and thought of my privilege. I moved to Bed-Stuy two years ago. Recently I got a job that allows me to read for-sale signs with interest. It’s easy to speak from one side of the line but live on the other without admitting my choice.

I wanted Ballard’s innocence to choose for me. The public relations officer for the NYPD told me he was wanted for robbery, petty larceny, harassment and unlawful possession of marijuana. I called Ballard’s father and left a message asking if it was true. I never heard back from him.