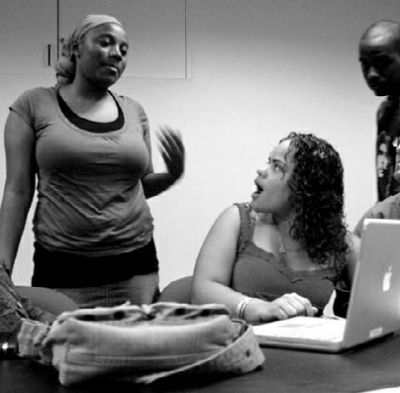 On an early Thursday morning, in a building tucked away on 59th street between 10th and 11th Avenues, a group of young people researched topics for an upcoming segment they would be producing for a show called “Manhattan Neighborhood Network Defense Against Media Nonsense.” The room was plain, but the enthusiasm of nine high school students and two trainers brought it to life.

“This program gives me production skills,” said high school sophomore Adahm Walcott, one of the young people working on the segment that day. “I have ideas to do things and without the Youth Channel I wouldn’t have a chance to put these ideas to use.”

In a time when programs like Manhattan Neighborhood Network (MNN) struggle to stay afloat, the Communications Opportunity, Promotion and Enhancement (COPE) Act threatens its existence.

“Right now the government is trying to cut us off, take away our funding, and take us off the air,” said Youth Channel member Timara Manson. “I don’t think they should do that. What we do here is important.”

Introduced by Senate Commerce Chairman Ted Stevens (RAK), and House Energy and Commerce Chairman Joe Barton (RTX), the COPE Act, if passed by the Senate, would allow billiondollar telecommunication companies to enter the cable business and will make using the Internet for educational purposes substantially more difficult. On June 8, the act passed in the U.S. House of Representatives by a vote of 321-101.

Betty Yu, a community outreach and media specialist with MNN, said the act would have a crushing effect on public access television. “The COPE Act, if passed by the Senate, will limit the future funding and channel space for Public, Educational and Governmental (PEG) Access television,” said Yu.

The Senate has constructed a companion bill to the COPE Act known as S.2686. If passed, it, too, would be devastating to community media throughout the country. A report issued by the Alliance for Community Media showed that this legislation would be a major blow to PEG, leading to funding cuts of 35 to 50 percent.

Although the COPE Act was passed by the House, Michael Eisenmenger and Betty Yu of MNN hope that this will not be the year that COPE becomes law.

“[Senator] Stevens faces some difficulty,” said Yu. “He needs at least 60 votes to have COPE pass through Senate and it doesn’t look as though he will get all 60.”

Although the New York City Council passed a resolution against the COPE Act by a 50-0 vote, eight of the city’s 13 congresspeople voted in favor of COPE including Democrats Charles Rangel, Major Owens, Gregory Meeks, Edolphous Towns and Eliot Engel. The grassroots lobby of MNN and other groups did resonate with Carolyn Maloney of the 14th Congressional District.

“Maloney was a co-sponsor of COPE and changed her whole view because of the education we provided her with,” said Yu.

While the future of public access remains unknown, those whom it affects most struggle to keep it intact.

“If this bill passes, our funding would be cut and then we would really be out of luck,” said Youth Channel peer trainer Habiba Ahmad. “Coming to MNN Youth Channel has changed my life and the lives of the youth involved with the program. It would be a very sad day if COPE passes.”