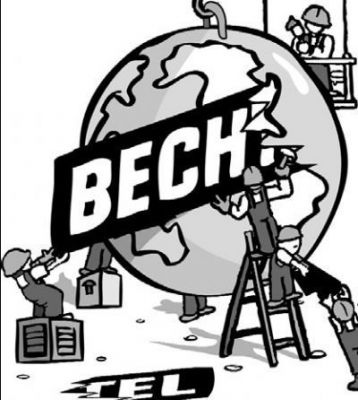 The year was 1976. The Shah ruled Iran. The company hired to build him a nuclear reactor was the Bechtel Corporation. Now, 30 years later, Bechtel is sitting on more than $1 billion in Iraq reconstruction contracts and is busy building the “next generation” of nuclear weapons here at home. Meanwhile, the current Bush administration, which awarded those contracts, is busy sounding alarms about the Iranian nuclear threat.

It is these kinds of relationships that have activists pointing toward San Francisco-based Bechtel in their efforts to identify a single Iraq War profiteer to, as writer-activist Arundhati Roy has suggested, “go after.”

To combat the almost limitless reach of a corporate giant that has offices in 26 countries, citizens across the United States are coordinating a multi-pronged convergence on Bechtel facilities on Aug. 6 – 9. Principal events are planned in: Pittsburgh, the Bay Area, Boston, Oak Ridge, Tennessee and New Mexico’s Los Alamos test site (the birthplace of the atomic bomb, and now privately operated by a Bechtel-led consortium).

Activists claim Bechtel is the largest manufacturer of nuclear weapons systems in the world. It has built more than half of the nuclear facilities in the United States and has had close ties to Republican presidents since Richard Nixon.

When organizers like David Meieran of the Thomas Merton Center in Pittsburgh say they “are opening another front in combating the pillars of war and empire,” they have in mind people like George Shultz, director and president of Bechtel before his appointment as Secretary of State in 1982 and more recently a member of the hawkish Committee for the Liberation of Iraq. Activists see Shultz’s influence as indicative of the complicity between Bechtel and its allies in government.

As Shultz said before the war: “If there’s work to be done in Iraq, Bechtel’s the kind of company that could do it.”

The dates of the protests coincide with the 61st anniversary of the atomic bombings of Hiroshima and Nagasaki, at the end of World War II.

Tara Dobaji, an organizer in Alameda County, CA., where Bechtel is the fourth-largest employer, take an optimistic approach. She stresses the need to “inform the people who are part of these systems what they are responsible for. Because they’re good people.” Bechtel, she notes, could put its expertise to many projects such as “rebuilding the Bay Bridge” damaged in an earthquake 17 years ago, “instead of nuclear weapons and war profiteering.”

But as former Bechtel president Steve Bechtel Sr. once said: “We are not in the construction and engineering business. We are in the business of making money.”