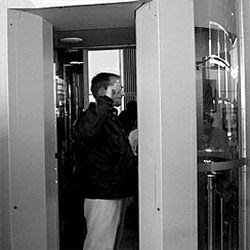 Like a twisted elementary school class show-and-tell, on July 11 the Department of Homeland Security (DHS) demonstrated its latest effort to search commuters and thwart an attack on New Jersey and New York City’s transit lines.

From July 13 to 27 the DHS will require passengers at the Exchange Place PATH station in Jersey City to be searched using millimeter-wave technology. During rush hour, passengers will be selected at random for screening; at other times all PATH riders will be screened.

Passengers will either walk through an open area lined with sensors or stand in what looks like a glass elevator. An image of the person is generated on a computer screen and is supposed to show large objects hidden under the person’s clothing. The screening should take no more than a couple of minutes, DHS officials said.

This is the second phase of a congressionally mandated program called the Rail Security Pilot Project; its results will be reported to Congress in the fall. The federal pricetag is $10 million.

“The technology we’re testing today is designed to look for larger objects like a suicide belt vest and not smaller objects,” said DHS spokesman Christopher Kelly. “It’s calibrated to look for bigger things.”

“There’s no way you can see any kind of body part,” said Kelly. “You can’t see any underwear. It’s designed to look at big bulky objects that may not typically be there. This is really just designed to check on explosives.”

Reporters at the DHS press briefing at Exchange Place were told not to take photos of the computer images for “security reasons.” The image generated is highly pixilated – the person’s body, or even gender, cannot be made out. If an anomaly is detected, it is shown as a colored splotch.

From there, the screener, a Transportation Security Administration-certified contractor with at least six months of airport experience, performs a secondary screening, in which the suspect is wanded and subjected to a patdown search, according to Kelly.

Much like the widespread NSA wiretapping program and the random searches in New York City’s subways, the new program at Exchange Place shows that the government is casting its surveillance net wider and wider.

“It always troubles us to see a trend in which citizens are encouraged to waive their constitutional rights in the course of their daily affairs,” said Scott Morgan, associate director of Flex Your Rights, a Washington, D.C.-based organization opposed to unconstitutional searches.

The surveillance debate is often framed as civil liberties versus security, as if the two were mutually exclusive. But there are serious questions as to the effectiveness of random searches and omnipresent government spying.

Since New York instituted its random search policy on the subways a year ago, there have been five arrests all unrelated to terrorism – for drug possession, disorderly conduct and other minor charges – according to the Associated Press (July 9, 2006).

City Belt requested information from DHS and the Port Authority of New York and New Jersey on how many terror suspects were apprehended and how many people were arrested on charges unrelated to terror since the random bag search policy was instituted last July for travelers using the Port Authority’s PATH system, the Port Authority Bus Terminal, AirTrain JFK and AirTrain Newark.

We have not yet received an answer.

“Suspicionless searches – of anyone walking by, searches with no particularized suspicion, no probable cause to suspect the individual being searched is likely to be involved in a specific crime as the fourth amendment requires – these searches are always going to have a very, very low hit rate,” said Morgan. “It’s very hard to find what you’re looking for when you don’t use any criteria to decide who to scrutinize.”

WAR ON TERROR,MEET WAR ON DRUGS

While the pilot program at Exchange Place is supposedly only looking for explosives, if “illegal drugs or drug paraphernalia are found during the screening process, a Port Authority law enforcement officer will respond,” according to informational literature published by DHS.

As Lee Tien, senior staff attorney with the Electronic Frontier Foundation, pointed out, these searches tell PATH users: “Anything you carry may be used against you.”

That was certainly Larry Bailey’s fear in February when DHS tested the first phase of the Rail Security Pilot Program at Exchange Place. Commuters were asked to go through screening devices similar to those found at airports.

Bailey was carrying a small bag of marijuana. Bailey, a comedian and blogger now living in Long Island, refused to be searched and left the station.

“I really don’t think there’s anything you can do aside from completely stripping away peoples’ civil liberties and rights,” he said. “What we’re trying to do is stop up all the leaks. But one pops up somewhere else.”

But despite the serious questions as to the effectiveness of random searches, the surveillance machine still pushes ahead. After all, DHS puts on a great show.