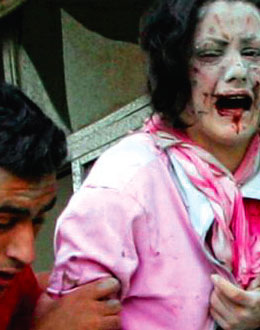 Editor’s note: The following report has been posted on various blogs and is said to be a letter from “Rasha” to a friend in Israel. This version has been excerpted and edited for style.

A Report From Beirut

BEIRUT, Lebanon—I am writing now from a cafe, in West Beirut’s Hamra district. It is filled with people who are trying to escape the pull of 24-hour news reporting. Like me. The electricity has been cut off for a while now, and the city has been surviving on generators. The old system that was so familiar at the time of the war, where generators were allowed a lull to rest, is back.

The cafe is dark, hot and humid. Espresso machines and blenders are silenced. Conversations, rumors, frustrations waft through the room. I am better off here than at home, following the news, live, on-the-spot documentation of our plight in soundbites. The sound of Israeli warplanes overwhelms the air on occasion.

They drop leaflets to conduct a “psychological” war. Yesterday, their sensitivity training urged them to advise inhabitants of the southern suburbs to flee because the night promised to be “hot.” Today, the leaflets warn that they plan to bomb all other bridges and tunnels in Beirut. People are flocking to supermarkets to stock up on food.

This morning, I wrote in my emails that the targets seem to be strictly Hezbollah sites and their constituencies. Now, I regret typing that. They will escalate. Until a few hours ago, they had only bombed the runways of the airport, as if to “limit” the damage. A few hours ago, four shells were dropped on the buildings of our brand new shining airport.

The night was harrowing. The southern suburbs and the airport were bombed, from air and sea. The apartment where I am living has a magnificent view of the bay of Beirut. I could see the Israeli warships firing at their leisure. It is astounding how comfortable they are in our skies, in our waters; they just travel around and deliver their violence and congratulate themselves.

The cute French-speaking and English-speaking bourgeoisie have fled to the Christian mountains. A longstanding conviction is that the Israelis will not target Lebanon’s Christian “populated” mountains. Maybe this time they will be proven wrong?

The Gulfies, Saudis, Kuwaiti and other expatriates have all fled out of the country, in Pullman buses via Damascus, before the road was bombed. They were supposed to be the economic lifeblood of this country. The contrast in their sense of panic as opposed to the defiance of the inhabitants of the southern suburbs was almost comical.

This time, however, I have to admit, I am tired of defying whatever for whatever cause. There is no cause really. There are only sinister post-Kissingerian type negotiations. I can almost hear his hateful voice rationalizing laconically as he does the destruction of a country, the deaths of families, people with dreams and ambitions so the Israelis can win something more, always more.

The short-term military strategy seems to be to cripple transport and communications. And power stations. The southern region has now been reconfigured into small enclaves that cannot communicate between one another. Most have enough fuel, food and supplies to last them until tomorrow, but after that the isolation of each enclave will lead to tragedy. Mayors and governors have been screaming for help on the TV.

This is all bringing back echoes of 1982, the Israeli siege of Beirut. My living nightmare. It was summer then as well. The Israeli army marched through the south and besieged Beirut. For three months, the Reagan administration kept dispatching urges for the Israeli military to act with restraint. And the Israelis assured them they were acting appropriately.

We had the PLO command in West Beirut then. I felt safe with the handsome fighters. How I miss them. Between Hezbollah and the Lebanese army I don’t feel safe. We are exposed, defenseless, pathetic. And I am older, more aware of danger. I am 37 years old and actually scared. I am not defiant, there is no more fight left in me.

I am furthermore pissed off because no one knows how hard the postwar reconstruction was to all of us. Hariri did not make miracles. Every single bridge and tunnel and highway, the runways of that airport, all of these things were built from our sweat and brow, at three times the real cost because every member of government, because every character in the ruling Syrian junta, because the big players in the Hariri administration and beyond were all thieves.

Everyone one of us had two jobs (I am not referring to the ruling elite), paid backbreaking taxes and wages to feed the “social covenant.” We fought and fought that neoliberal onslaught, the arrogance of economic consultants and the greed of creditors just to have a nice country that functioned at a minimum, where things got done, that stood on its feet, more or less. A thriving Arab civil society.

Social safety nets were given up, healthcare for all, unions were broken and coopted, public spaces taken over, and we bowed our heads and agreed. Palestinian refugees were pushed deeper and deeper into forgetting, hidden from sight and consciousness, “for the preservation of their identity” we were told, and we accepted.

In exchange we had a secular country where the Hezbollah and the Lebanese Forces could co-exist and fight their fights in parliament not with bullets. We bit hard on our tongues and stiffened our upper lip, we protested and were defeated, we took the streets, defied army-imposed curfews, time after time, to protect that modicum of civil rights, that modicum of a semblance of democracy, and it takes one air raid for all our sacrifices and tolls to be blown to smithereens. It’s not about the airport; it’s what we built in the postwar.

I am tired of spending days and nights waiting not to die from a shell, on target or astray. Watching poor people bludgeoned, homeless and preparing to mourn. I am so weary…