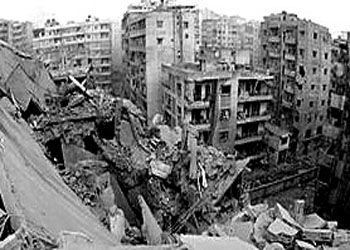 It’s wildfire season in the Middle East. Once again, brushfires have merged into a conflagration, threatening the entire region. But there are no firefighters rushing to the rescue, just pyromaniacs in Washington and Tel Aviv stoking the blaze.

By itself, the United States – armer and funder of Israel – could stop the collective punishment of Palestine and Lebanon. But the White House opted instead to block calls to halt Israel’s assault, and had Secretary of State Condoleezza Rice egg on Israel by saying a ceasefire had to be “sustainable,” a message to continue bombing until Hezbollah is destroyed. (As journalist Pepe Escobar notes, this would be tantamount to eliminating Hezbollah’s base – 1.5 million Lebanese Shiites.)

The dismemberment of Lebanon is not about retrieving two captured soldiers, any more than invading Iraq was about Sept. 11. The United States and Israel are trying to redraw the geo-political map.

For the United States, “the broader goal is to strangle the axis of Hezbollah, Hamas, Syria and Iran,” noted the Washington Post.

What are those designs? The same they’ve been since President Roosevelt met King Ibn Saud of Saudi Arabia in 1945 and struck a deal of military support and aid for the medieval kingdom in exchange for access to its oil.

There would be no need for a U.S. military presence in the Middle East today if not for the oil. Israel’s role is to keep the Arab nations divided and eliminate any threat to its regional dominance. That’s what it did in ’67 against Egypt , in ’82 against Syria and in ’81 with the bombing of Iraq’s nuclear reactor. Israel’s history from 1948 also negates the myth of “Israel the victim.” With the exception of the ’73 war it has been the aggressor every time.

Iran is the latest threat, perhaps because it is oil rich. Almost all the Arab rulers mouth opposition to U.S. and Israeli colonialism all the while contriving with them. Now, the silence of Egypt and Jordan and the criticism of Hezbollah by Saudi Arabia will certainly not pass unnoticed by the Arab street.

Having neutralized these states, United States and Israel continue to rely on overwhelming violence, which feeds the growth of resistance movements and “nonstate actors” like Hamas, Hezbollah, the Iraqi resistance, al Qaeda, etc. There will likely be a further growth in political (and puritanical) Islam, increasing the chance of a social explosion that upsets the regional order. The rise of these groups, in turn, provides justification for the war on terror.

For the moment the Bush administration is constrained politically and economically. Attacking Iran would send oil above $100 and bring the global economy crashing down. But that hasn’t stopped the neo-cons from calling on the United States to march on Damascus and Tehran. “This is our war, too,” wrote Weekly Standard editor William Kristol.

Neither Syria nor Iran has much to gain from a conflict. While they can amplify the disaster in Iraq in retaliation for being attacked, their military capabilities are minimal. For its part, Israel would like nothing more than to reduce Syria to rubble or bomb Iran’s nuclear fuel facilities. Attacking Hezbollah now benefits Israel by making it easier to attack Iran later.

Despite the unequal military forces – a few score rockets randomly lobbed daily hardly equates with decimating Lebanon’s infrastructure or turning 500,000 people into refugees – Hezbollah still holds the upper hand politically. As much as it and its supporters claim otherwise, the raid capturing two Israeli soldiers was probably linked to the war on Gaza. Events in the Middle East don’t happen in a vacuum.

Nonetheless, Hezbollah knows that Israel will eventually agree to a prisoner swap. By resisting Israel, its credentials have been burnished in the region and the continued Israeli bombing will only swing more Lebanese support behind it.

It’s unlikely that the crippled state that emerges in Lebanon will have the will, desire or ability to serve as Israel’s gendarme and secure the border regions. One question is if Israel’s purpose is to provoke civil war in Lebanon, as it has tried (unsuccessfully, so far) to do in Gaza.

The Israeli military claims to have learned from its disastrous 1982 invasion of Lebanon, but there is already talk about sending in “massive ground forces.” Israel is preparing the way by depopulating South Lebanon. If it does invade, then anyone who remains will be a target. It’s a recipe for slaughter and disaster.