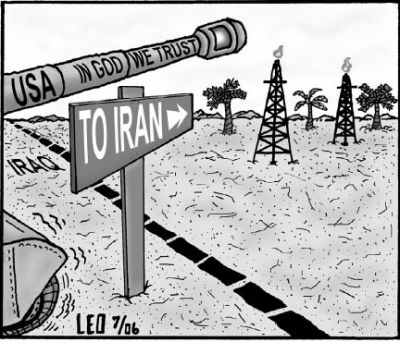 As preparations for war against Iraq intensified in the fall of 2002, neoconservatives in Washington were fond of remarking that “The road to Tehran runs through Baghdad.” The toppling of Saddam Hussein was to be the first step in remaking the map of the Middle East through military force. Syria and Iran were on the hit list, and even Saudi Arabia was suggested as a candidate for regime change.

Three years after invading Iraq the U.S. military is bogged down but that hasn’t cooled the ardor for attacking Iran. Since late last year, the Bush administration has stepped up pressure on Iran.

In many ways, the campaign seems a replay of the Iraq War: attack a reactionary Middle East regime with vast oil reserves over the issue of weapons of mass destruction and terrorism, pressure or bribe other countries and international institutions to join in, talk diplomacy but place intolerable conditions that doom any negotiations, and all the while prepare for war.

The maneuvering against Iran is part of a larger neo-conservative project to ensure U.S. global supremacy for the 21st century. The plans have been kicking around since 1992 when then-Defense Secretary Dick Cheney oversaw Undersecretary for Policy Paul Wolfowitz in drafting a Pentagon planning document that stated, “In the Middle East and Southwest Asia, our overall objective is to remain the predominant outside power in the region and preserve U.S. and Western access to the region’s oil.”

That’s where Iraq and Iran come in. Tom O’Donnell, a physicist at the University of Michigan who studies the “globalized oil order,” says the reason a conflict with Iran is coming to a head now is because “there is a shortage of capacity in the oil sector and that can only be made up by the Gulf States in the Middle East, and Iraq and Iran are way below potential.” O’Donnell says that the International Energy Agency estimates that by 2020 the world will need a three-quarter increase in pumping capacity over 2001 to meet growing demand, and big oil projects “take seven to ten years to come online.” Hence, the urgency felt by the U.S. government to deal with Iran now.

As evidenced by record-high oil and gasoline prices, the world is facing limits on crude oil production. After Saudi Arabia, Iraq and Iran have the largest reserves of liquid crude in the world. Both, however, have seen their oil industry hobbled by U.S. policy, causing the global supply shortage.

For Iraq, sanctions kept oil exports under 2 million barrels a day after the oil-for-food program was established in 1997 (and virtually nothing for the six years prior to that). Iraq was also thwarted from making basic repairs to its oil industry. From 1998 to 2001, Iraq applied to purchase some $2.5 billion in spare parts for the oil industry allowed to it under the sanctions, but received only $953 million in goods.

As for Iran, on March 15, 1995, President Clinton issued Executive Order 12957, banning U.S. companies from investing in Iran’s oil and natural gas industries. This was followed up two months later by another executive order forbidding all U.S. trade and investment with Iran. Then in December 1995, Congress passed the Iran-Libya Sanctions Act, which threatened penalties against any foreign company investing more than $20 million in Iran’s energy sector in a single year.

The Bush administration won’t allow Iran’s oil production to grow under the clerics, argues O’Donnell, because that would allow them to use oil as a weapon. Iran pumps 3.8 million barrels of oil a day, but it exports only 2.7 million. In an interview with Reuters on April 19, International Energy Agency Executive Director Claude Mandil underscored why Iran is currently unable to use oil as a weapon. Mandil said, “if we have to offset Iranian exports… we have kept over 4 billion barrels (of stocks), which can last several years.”

Eager to modernize its oil industry, Iran has offered to give up uranium enrichment almost completely as part of a “grand bargain” with the United States. In return, Iran wants a security guarantee that it will not be attacked and sanctions lifted on its energy sector. After the fall of Baghdad in April 2003, The Washington Post reported on June 18, Iran offered a comprehensive agenda for negotiations and “suggested everything was on the table – including full cooperation on nuclear programs, acceptance of Israel and the termination of Iranian support for Palestinian militant groups.” Flush with victory, however, the Bush administration spurned the proposal.

As a precursor to negotiations, the Bush administration is demanding that Iran suspend all enrichment activity. In return, it’s offering Iran spare parts for aging airliners (from Boeing), support for entry into the World Trade Organization and light-water reactors. Iran has turned down the offer of light-water reactors, however, noting that it would be required to import enriched uranium to fuel them, leaving the country vulnerable to political pressure placed on suppliers.

By giving up its one trump card – uranium enrichment – Iran would be left with almost no bargaining power, no security guarantee and no lifting of sanctions. The United States is essentially making an impossible demand on Iran, says O’Donnell, “because they want to inflame the conflict. They want to do it over nuclear weapons because it would look bad to do it over oil.”

At the same time, Iran’s ruling elite, often referred to as hardliners, as opposed to the reformist opposition, also benefits from confrontation with the United States. Faramaz Farbod, a native of Iran and an Adjunct Professor of Political Science at Moravian College in Pennsylvania, explains that President Mahmoud Ahmadenijad is “a second generation revolutionary, a throwback to the 1979 era.” During the Islamic revolution in the late seventies, the hardliners used the hostage crisis to sweep away domestic opposition. “Now,” says Farbod, “some would probably welcome a limited U.S. attack. It would allow them to get rid of all their opponents. Even short of a military confrontation, the present political confrontation also helps the hardliners in repressing dissent.”

“These guys are not Saddam Hussein,” says Farbod, “they have a social base, albeit probably a shrinking one.” He describes the hardliners’ base as the domestic petite bourgeoisie, while their political discourse is aimed at the poorer classes. Ahmadenijad’s government promises them “cheaper bank loans and tapping into oil reserve” funds to prop up the system of food and fuel subsidies.

If Ahmadenijad “can’t remove the U.S. sanctions on Iran he can’t deliver on these promises,” says Farbod. “This is one of their goals [in trying] to remove U.S. sanctions with the bargaining chip of uranium.”

Iran is in an economic crisis that will only worsen, says Farbod. “The official unemployment rate is 15 percent. To keep pace with this rate, the government needs to create about 700,000 jobs a year. Most economists point to the fact that the government can produce only half of this… The economic situation is worse than in the late nineties. Many people have two jobs, three jobs.”

“There are three facets to the economic crisis,” explains Farbod. “The first is the ‘petroleum curse,’ which makes for laziness on the side of the economic sector of countries that rely on petroleum.” About half of Iran’s governmental budget comes from oil and gas exports. The second is “the massive control that secretive foundations have over the economic lifeline of the republic, which are unaccountable. These are pseudo-religious foundations, since religion is political in Iran. They control almost all the domestic economic activities – service, agriculture, manufacturing. They have their tentacles everywhere… We have no idea how the funds are used.” The third aspect is the U.S. sanctions, which “have limited the amount of direct foreign investment.” The sanctions also dampen “domestic investment by increasing the general insecurity of economic activity.”

Looking forward, it would be a mistake to think that the United States won’t attack Iran because it’s bogged down in Iraq, argues O’Donnell. Writing in the June issue of Z Magazine, he suggests that the U.S. would first try to cripple Iran’s air force, making Iran “susceptible to ground incursions by various forces hostile to the regime. These might include Kurdish, Azerbaijani and other nationalist separatist forces, which have long fought against Iran’s central government.”

Iran is clearly in a fix. The mullahs are loath to capitulate to U.S. demands as this would imperil their rule at home. At the same time, the United States has succeeded in uniting all the major capitalist powers behind it. Even Russia and China have demanded that Iran suspend uranium enrichment. Having had numerous chances to resolve the conflict peacefully, the Bush administration seems eager for war. An attack against Iran may come this fall in an attempt to influence congressional elections. But even if it doesn’t, the Bush administration still has two-and-a-half years left to stir up trouble.