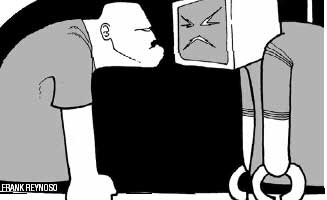 Is convenience our American birthright? I went to Union Square to see a movie and arrived early to buy a ticket. Instead of going to the counter where people waited patiently in line, I went to the automatic ticket machines where moviegoers cut lines and glared at each other. As we jostled to get our tickets, I wondered: why do we refuse to wait in line?

It felt natural to get my own ticket and that feeling made me suspicious. Often, what I assume is natural becomes absurd when I take the time to think about it. Even when there is no line at the counter I see people use the ticket machines. They promise more than convenience; they promise to safeguard your individuality.

You do not have to wait in line, but can instead cut through the anonymous crowd. The individual versus the crowd is the great American fantasy that defines our identity as consumers. Most of us remember the classic Cold War image of Soviet workers standing in long lines for soap. Life without capitalism, we’re shown, is waiting in a hungry crowd. The only cure for state incompetence is the marketplace, an economic theory that David Harvey writes about in A Brief History of Neo-liberalism. It is “the assumption that individual freedoms are guaranteed by the freedom of the marketplace.”

It is an assumption that we see in the ritual of automating the service sector; where before one waited with others, flirting, gossiping with strangers, now we arrive at the theater as individual

As I got my ticket, some of the machines broke down and people began slapping the screens but there was no one to help because the staff was cut. As more of our life is automated, outsourced or privatized, we become competitors not just for movie tickets, but for jobs, housing, education and healthcare. Our neo-liberal freedom has become a cage.

While going to my seat I remembered the Fandango commercial where a man who did not use the automated ticket service arrived to the theater too late. Instead of giving up, he performed silly antics, dressing up, acting out roles to get in as the pretty clerk smiled. Stranded outside of the film, he became the characters he wanted to see. I wondered, as education becomes more expensive and low-skill jobs automated and outsourced, how will we pay for the tickets to our

American fantasy? Instead of buying individuality will we finally be forced to create it?