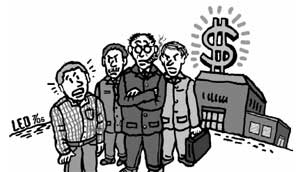 On July 26, the Chicago City Council broke ranks with both Mayor Richard Daley and powerful business groups to pass an ordinance that mandates higher pay and benefits for workers at Big Box stores.

Chicago ACORN led a coalition of labor unions, grassroots community groups and advocacy projects over many months that pushed aldermen to back the legislation – an organizing effort that came in the wake of an unsuccessful bid by many of these same groups to block permission for Wal-Mart to build a store inside Chicago city limits. The end result was a groundswell of public pressure on local elected officials to support the Big Box ordinance, and a threat from supporters to challenge elected officials in elections next year if they opposed the ordinance.

“This legislative initiative is crucial for maintaining decent standards for wages and benefits in the city,” said Marrianne McMullen of SEIU’s Illinois Council. “Big box retailers like Wal-Mart set standards for wages throughout the city, and Chicago needs to make a clear statement that working people won’t get exploited.”

Chicago first passed a living wage ordinance eight years ago, and four years later indexed the living wage rate to the cost of living. But that ordinance affects only a limited number of people who work for city contractors.

The Big Box ordinance is designed to expand those benefits to a much broader group of workers: those who work for stores of at least 90,000 square feet and whose companies make least $1 billion in annual sales. Roughly 40 stores in Chicago are expected to be impacted by the ordinance, including Target, Sears, Home Depot and Macy’s.

Mayor Daley has ratcheted up his public opposition to the ordinance, most recently charging that the legislation will cause a spike in property taxes. Daley has until Sept. 13 to decide if he will veto the bill, a move that would mark his first veto in more than 15 years as mayor. And while the ordinance passed by a veto-proof majority, the business lobby, historically cozy with Daley, has aggressively lobbied for a veto. Groups that include the Illinois Retail Merchants Association have also threatened to sue to prevent the ordinance’s enforcement.

But supporters of the ordinance, which was written with assistance from the Brennan Center for Justice at the NYU School of Law, believe it can past constitutional and legal muster. More importantly, they scoff at charges from the business lobby that the ordinance will hurt job growth and the economy.

“If you look at the facts, and not just the business community’s untruths, you find that these sorts of ordinances can, in fact, have a very positive economic impact,” said Chicago Alderman Joe Moore, the principle sponsor of the ordinance. “Studies show that states with higher minimum wages have greater job growth, greater retail sales and greater economic growth than what we see at the federal level. Why? Because when working-class people get a few extra dollars they spend it in the local economy on goods and services that help the economy grow.”

Moore points to studies on living wage ordinances in San Francisco and Santa Fe, New Mexico, which show no adverse economic impact from the laws to the local economy. In Santa Fe, job growth actually increased at a rate greater than the statewide New Mexico average, and the increase in retail sales exceeded that of inflation.

Business opposition is as much about ideology as practical impact, says McMullen. “All of these businesses and lobbying groups with no dog in this fight have piled on to fight this bill,” she said. “Why? Because whenever they see business regulated, in any way, whether its fiscal impact is huge or insignificant, they freak out, because ideologically they oppose any regulation of capital in any way.”

But McMullen also says the groups that organized to push for the ordinance have built a solid alliance that will only grow stronger – and that transcends the split that took place in the AFL-CIO last year after the SEIU and other unions broke away to form the Change To Win coalition.

“When you have a national administration that is this hostile to labor, taking up labor issues on the state and municipal level is more important than ever,” she says. “What we do on the municipal level can set standards for other cities, and battling exploitive employers in every venue we can is crucial when confronting anti-worker shops like Wal-Mart. In many ways, the

national labor split has increased our local sense of urgency to support organizing drives and work together more intensely on shared issues.”