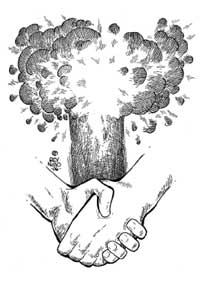 The red flares of destruction and death are rising across the Middle East. The United States is now engaged directly in fighting on two war fronts (in Iraq and Afghanistan) and by proxy in two more (in Lebanon and Gaza). And the worst is yet to come.

But the sounds and scenes of war on the nightly TV news are eliciting no sense of concern from the American people. Where they aren’t enthusiastically supporting the onslaught, they are complacent, indifferent, passive before the spectacle of war and suffering. They defend their ignorance, their failure to recognize the regional threats implicit in the policies of the Bush administration.

The U.S. is mired in Iraq, and seeking to extricate itself not by withdrawing troops but by expanding the conflict, now into Lebanon and later into Syria and Iran. The administration must follow such a course or acknowledge that its quest to dominate the Middle East is doomed.

Israel is ensnared in U.S. policy. For decades, the U.S. has used Israel as a spearhead in the region. Israel has complied, dependent on more than $3 billion per year in American aid and arms. The Israelis have been very seriously misled, believing that their safety could be secured by allying themselves with the U.S. while ignoring and repressing their Arab neighbors.

For decades, the U.S. has had no interest in peace in the Middle East. Violence and chaos serves its purposes. It will never permit the establishment of a viable Palestinian state, which might provide a solution to the Arab-Israeli dilemma. It will never relinquish its pursuit of the vast oil reserves in the region.

Hezbollah miscalculates, seizing two Israeli soldiers, and is surprised by the force of Israel’s response. Israel bombs Beirut, and destroys Lebanon’s infrastructure but encounters fierce resistance by Hezbollah that exceeds its expectations.

Hezbollah rockets pound northern Israel. As in the past, the Israeli army also drives into Gaza. Casualties are inflicted, homes destroyed. Media coverage is minimal. U.S. policymakers observe, calculating their next move.