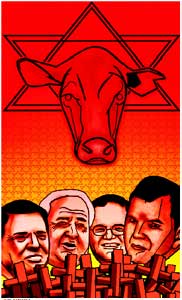 Based on recent events in the Middle East, one could be excused for believing the world as we know it is ending. The last few years, however, have seen a proliferation of groups who not only think that Armageddon is coming, but are actively working to hasten its arrival.

The movement, generalized under the moniker “Christian Zionists,” is made up of many groups, that have somewhat divergent aims. But they all have one thing in common: they are Christians for Israel. For all these groups, the existence of a Jewish state is an essential prerequisite for Christ’s second coming.

The most prominent figure of the movement is John Hagee, who leads an 18,000-member evangelical church based out of Texas and can be seen twice daily on over 92 million TV sets. Hagee has given $8.5 million to help Soviet Jews move to Israel, and is largely responsible for the growing support for Zionism among Christian evangelicals.

“In Christian theology, the first thing that happens when Christ returns to Earth is the judgment of nations… It will have one criterion: How did you treat the Jewish people? Anyone who understands that will want to be on the right side of that question,” Hagee says.

Then there’s Clyde Lott, a Mississippi preacher who has devoted himself to raising a few red heifers to send to rabbis in Israel. The sacrifice of these cows would enable the building of the Third Temple. He cites an obscure passage in the Book of Numbers that requires a perfect red heifer that has never been yoked to be sacrificed and its ashes used to purify those who wish to pray in the temple.

Four years ago, he succeeded in breeding a red cow declared acceptable by rabbis (that is, having less than six black or white hairs). Speculation abounded whether this would be the cow to bring on end times. His plans were sidetracked, however, as international regulations about shipping animals overseas prevented him from sending the heifer or any others to Israel – for the time being. But he persists, “If there’s a sovereign God with his hand in the affairs of men, it’ll happen, and it’ll be a pivotal event,” he told AlterNet. “That time is soon.”

And he’s not alone. According to various polls, an estimated 40 percent of Americans believe that events to bring about the end of the world are under way.

Hagee founded Christians United for Israel (CUFI) in February of this year, which he intends to be the Christian version of the American Israeli Public Affairs Committee. CUFI’s Board of Directors includes conservative luminaries such as the Reverend Jerry Falwell, and their annual night to honor Israel has drawn leading Republicans including former House Majority Leader Tom DeLay, who was the keynote speaker in 2002. In his latest book, the best-selling Jerusalem

Countdown, Hagee argues that the United States and Israel must strike preemptively against Iran, as a prerequisite to bring on Armageddon and the Second Coming of Christ. This, he says, is all part of God’s plan for the West.

What is less spoken about is the aftermath of Jesus’ coming. While some fundamentalist Christians refer to Bible passages that say gentiles and Jews will stand as one when the end comes, the more widespread belief among Christian Zionists is that the Jewish people will need to accept Jesus as their savior upon his return. The alternative is to be cast into Hell, along with all the other nonbelievers.

This hunger for the apocalypse has sparked some disagreement in the Jewish community over the recent outpouring of support for Israel among Christian evangelical groups. Some have praised Hagee for his unwavering devotion to the Jewish people. Others, such as Rabbi Brad Hirschfield, vice president of the National Jewish Center for Learning and Leadership in New York, have called him “quite dangerous.”

Hagee doesn’t fear the end, however, but rather God’s wrath for standing by as Iran completes its alleged plan to destroy Israel. Nuclear war between America and Iran, he says, will lead to the renewal of the Garden of Eden. “The righteous are going to rule the nations of the Earth,” he says. “It’s going to become a Garden of Eden, and Christ is going to rule it.”