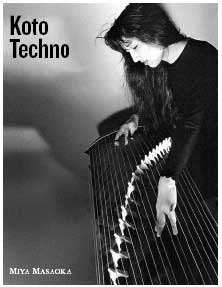 Miya Masaoka is cloaked in all-black attire. Two towers that emit twelve laser beams overwhelm her petite size. But it is her magician-like gesturing that captures the audience’s attention at McCarren Park in Brooklyn on July 25. Masaoka provocatively plays an interfaced koto with visceral hand movement that is reminiscent of Tai Chi arm articulation.

The koto is a hollow-bodied, harp-like instrument, simply constructed, deeply resonating. It becomes the monstrosity of an interfaced koto when a labyrinth of wires is attached to Masaoka and a microcomputer. With the help of Studio for Electro Instrumental Music, a team of Dutch technicians, Masaoka mapped out 900 prerecorded koto samples, added a series of six pedals, and a button switchboard. Technology gives Masaoka the interactive capacity and aggressive quality to create a sound vaster and more vibrant to a bare-boned koto.

Masaoka is at heart a kotoist trained in gagaku music, the ceremonial style of Japanese Imperial
Court with roots in Shintoism. Masaoka distilled a potent element of gesture from traditional kotoplaying.

“Aural gesturalism” is what she calls this physical act of performance. The message of Masaoka’s music lies in motions which tamper with the koto’s anatomy. Graceful, exaggerated rises of the hand and arm and “limp-wrist” curved fingers create a dance on strings. She will bow, pull, hit, pluck, push and mallet the strings beyond their pitches of normalcy towards a very different, experimental realm. The presentation requires physical exertion, but her motions alone provoke a rapturous calm.

Hybrids of music, technology, and nature are innate to Masaoka’s hypnotic sound. “What is the Difference Between Stripping and Playing the Violin?” featured the Masaoka Orchestra, comprised of a string section, jazz and rock players from various styles. The project spawned the birth of Tai Chi conducting, or Masaoka’s style of juggling several time signatures with Tai Chi movement.

Dedicated to sparking media attention to serial murders of female prostitutes in the Mission District of San Francisco, Masaoka’s project was multi-faceted. She spearheaded a panel discussion series in reaction to the media’s flippant ignorance of the incidents. In the forum, people discussed about community awareness, the commodification of sex, and dangerous intricacies of sex work.

The project as a cohesive whole had a vitality that depended on the fusion of music and activism.

She collaborated with piano innovator Cecil Taylor, debuted cello and field recordings and assembled installations. Then her choice of main interdisciplinary players took a bizarre turn: insects and plants.

Masaoka conceived “Ritual with Giant Hissing Madagascar Cockroaches” and “Pieces for Plants” from the same platform. The complexity of insects and plants fascinates Masaoka, whether it is bee hierarchy, the curious way cockroaches creepily discover the naked flesh, skin as a blank slate, or plants as metaphors for unwanted immigrants.

Masaoka thrusts EEG electrodes on a houseplant to conduct a cacophony in its natural habitat.

Masaoka performs songs the way cockroaches discover a human’s body: madly, intuitively and at risk of triggering a colony of dissonant white hissing noise. She reigns in the avant-garde tradition as a composer of many trades. Whether it is the 12-string zither of a koto or its laser adaptation, hissing cockroaches or electrode-stimulated houseplants, she is a spellbinding explorer of the foreign canvas.

Miya Masaoka’s next New York performance will be at Merkin Hall on Oct. 5. She will be playing with her trio, Chironomy with Samir Chatterjee and Taylor Ho Bynum, as well as two solo pieces.