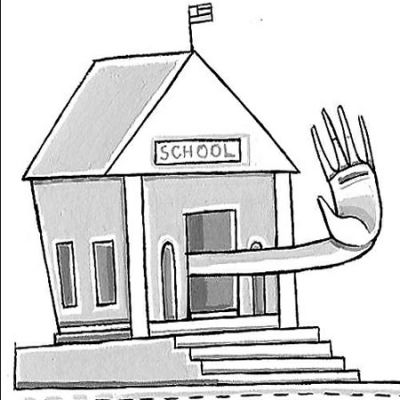 Dariana Taulino has dreamed of joining the military since she was a little girl. She likes the structure, discipline and the sense of shared purpose. Now 18 and a graduate of The School of Excellence in the Bronx, she should be on her way to boot camp. But with the war raging in Iraq, family and friends have convinced her to stay out for now.

“I still want to go the Air Force,” Taulino says, “but everyone has been telling me to go to college. With college you can drop out when you want, with the Air Force it’s not like that” Taulino’s quandary is being played out all over the country as potential recruits finish high school and weigh making the biggest decisions of their young lives against the backdrop of war in the Middle East.

In New York, new recruiting stations have been open in communities like East Harlem and the Bronx. More recruiters with professional-level sales skills are hitting the streets. At the recruiting station in the Fordham part of the Bronx, the use of Hummers blasting Reggaeton on a busy street corner is not uncommon. Aggressive recruiter presence can also be found throughout the city’s public high schools.

“I couldn’t believe this huge man was walking in the hallways,” says Carey Feliciano, the Chair of the Uptown Youth for Peace and Justice who works with students in Harlem, the Bronx and Washington Heights. “I was scared; I can imagine high school students. The recruiters are in the schools, in the hallways, and at the best tables at their college fairs.”

Besides increasing the number of recruiters and spending more on advertising, the military now utilizes powerful new databases that track a wide array of personal information about young people age 16-25, including their consumer habits. The Army has also boosted enlistment bonuses, lowered fitness requirements, increased the maximum enlistment age to 42 and doubled the number of recruits it will accept who score in the lowest bracket on aptitude tests. In the past five years, the number of waivers it grants to recruits who have criminal records has doubled, according to a recent Chicago Sun-Times report.

The military’s relentless drive for recruits appears to be yielding results. After missing its 2005 recruiting goal by 6,600 enlistees, the Army has met all of its monthly recruiting goals this year. With the school year winding down, the Army saw its monthly recruiting total jump from 5,806 in May to 8,756 in June. To date, the Army has added 51,615 new recruits since the fiscal year began in October, according to Julia Bobick, a spokesperson for the U.S. Army Recruiting Command. The Army will need to enlist another 28,385 soldiers (or 9,700 per month) by Sept. 30 to meet its annual goal. The other military services (Air Force, Navy, Marines) are also en route to meeting their annual quotas.

Locally, the New York City Recruiting Battallion (which also encompasses Long Island, Westchester County and six northern New Jersey counties) has enlisted 1,343 new soldiers into the Army as of July 7, according to spokesperson Emilie Gockley. In FY ‘05, the battalion signed up 1,733 recruits.

For many young people, joining the military is a way to escape communities that offer little hope of a better future.

“My son had been talking about the Navy since he was in his last year of high school,” says Debbie Jones, a mother of four who lives on the Lower East Side. “He didn’t want to be like the rest of the boys on the block, selling drugs, hanging on the street corners getting into trouble.”

While young people ultimately are left with making the tough decision of choosing to enlist in the military or to go to college, a lack of information and funding for education is cited as a fundamental problem.

“People always want to blame hip-hop, the parents, the radio stations, but it’s a lack of resources. Funding is going towards recruiting methods, Feliciano says. “There is no money for after-school programs and there aren’t enough counter-military recruitment programs.”

When the decision to enlist is made, mothers like Debbie Jones can only hope that their children made the right decision and will come home safe.

“I get nervous, I keep saying, ‘What are we really fighting for?’ All I can do is pray,” says Jones, whose son, Bernell Carswell, will be deployed overseas for six months beginning in August. He is currently based in Atlanta.

Counter-recruiting activists at the Uptown Youth for Peace and Justice have been working hard to build a strong coalition that creates alternatives to the military. Currently the organization is planning a three-day weekend conference for September in conjunction with Brotherhood Sister Soul, The Community School for Social Justice, and the S.T.A.T.E. (Students Taking Action Toward Empowerment) The weekend conference will train students how to get the military out of there schools and offer alternatives to the military, such as hosting a career, job and college fair.

“There are options and students are not told that enough,” Feliciano says. “If going to college isn’t for you there are trade schools that offer job training.”

(John Tarleton contributed to this report.)