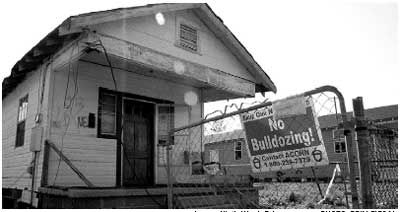 Driving through the Lower Ninth Ward on any given day, you are likely to see scattered groups on guided or unguided tours, tourist-filled buses and vans filled with church volunteers or scruffy activists on bikes. People come to see the levee – now rebuilt – and to view the general devastation, which is still very much present. In fact, until recently, bodies were still being discovered regularly, and few doubt that more remain buried amongst the rubble. Virtually no one from this large neighborhood has been able to return. Most of the area still has no electricity or running water.

“I want as many people to come visit here as possible,” a Lower Ninth Ward resident named Calvin told me as we walked past the infamous breached levees and destroyed homes of his neighborhood. “The national media has forgotten us, the politicians in DC have forgotten us. I support anything to get the word out.”

Among many people I’ve spoken with in New Orleans, this sentiment is common; the idea that the country has moved on, and if people would just come here and see for themselves, they’ll bring attention and consciousness.

Beginning days after the storm, New Orleans hosted a stream of celebrities and political players, from Sean Penn to Spike Lee, a United Nations Human Rights envoy, and a series of PR visits from president Bush. Later, Women of the Storm, a nonpartisan group led mostly by wealthy white women from New Orleans, raised a lot of cash and publicity for their mission to fly to DC and convince congressional representatives to come here and view the devastation.

“It was frustrating and painful at first,” former mayoral candidate and Lower Ninth Ward resident Greta Gladney recalls, referring to the people that have come to walk the streets around her home. “Before December, in order to see our own neighborhood, we had to ride on a tour bus, while contractors, insurance adjusters, journalists and police and soldiers could walk around there as much as they wanted. Politicians were using our neighborhood for leverage, to get more money from the federal government. But they don’t want the Lower Nine to be rebuilt, so the money they get from our suffering is not going to come to us.”

Now, we are days away from the long-heralded anniversary of the destruction of our city, and once again the tour buses are filling up. To commemorate the anniversary, the Nagin administration announced a party – fireworks at the superdome, a masquerade, and a comedy show at the downtown casino were all initially a part of the official city festivities.

Although those plans were widely seen as offensive, and have since been cancelled, there is still, for many, an unsettled feeling around this anniversary. How do you commemorate the anniversary of something that is still happening?

The devastation of our city is not just something that happened a year ago, it’s something that is going on yesterday, today, and tomorrow. Half of the people of New Orleans remain dispersed around the U.S. Suicide rates have tripled. The National Guard is still patrolling the streets. Most schools and hospitals – especially those serving poor people – are still closed. Central issues related to the planning of the city – including what neighborhoods will be rebuilt, how they will be rebuilt, and who will make the decisions – remain unresolved. Perhaps most importantly, few people here feel protected by the levees that surround this city.

We in New Orleans know that our moment is ending. This anniversary will bring one last deluge of media attention, but after that – barring another catastrophe – the spotlight will move on. The corporate media will reassign their reporters. Liberal foundations will redirect their money to the next urgent priority. Activist volunteers will be going back to school or onto the next volunteer hub.

Grassroots organizers have organized alternate plans for the anniversary, including vigils, press conferences, a tour of condemned public housing, and a memorial and march – beginning in the Lower Nine – organized by a coalition called the United Front to Commemorate the Great Flood. Local groups continue to organize in the neighborhoods of the city, and in the diaspora. Whatever happens in these coming weeks and months, for the people of New Orleans, the struggle – and the mourning – continues, with or without the attention of the world.

Jordan Flaherty is a union organizer and editor of Left Turn Magazine. He can be reached at neworleans@leftturn.org. He is not planning on moving out of New Orleans.