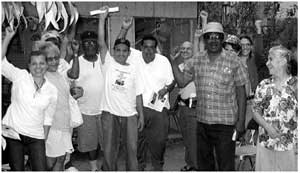 Over the past decade, Victor Medina has watched the 116th St. Block Association community garden in East Harlem evolve from an undesirable lot used to store stolen car parts to a bountiful garden filled with berries, cucumbers, tomatoes, peppers and peaches.

With 100 members and located across the street from a senior’s center, the garden serves as a refuge from urban life and as a venue for meetings, birthday parties and holiday celebrations.

“It’s a relief,” said Medina. “I sit here and it takes me back to Puerto Rico. We listen to some music, invite senior citizens, and enjoy the breeze.”

However, the 2523 square ft. lot at 8 E. 116th St. could soon be transformed again as the city’s Department of Housing Preservation and Development (HPD) has already drilled three holes at the site to test the ground for construction development.

“[HPD] tears things down, we don’t know if we should keep on preserving just for it to be destroyed,” said Medina in frustration. Currently, more than 50 community gardens are in danger of being sold to real estate developers.

Nineteen are located in Harlem, the majority of which lie between East 110th and 119th Streets and 5th and Lexington Avenues. The threat has prompted Medina, along with a group of roughly 15 other gardeners identifying themselves as Harlem United Gardens (HUG) to meet weekly on Friday evenings in order to prevent the further destruction of green space in their neighborhood.

“We need more green space in this neighborhood, not less,” said Aresh Javadi, a garden activist and co-founder of More Gardens Coalition, an organization that advocates for the preservation of community gardens.

“All you smell is cement and construction work,” said Benay Chisholm of Nueva Esperanza (New Hope) Garden at E. 110th and 5th Ave., which is slated to be replaced by a joint venture of the Museum for African Art and a developer of luxury condominiums.

“I understand we need housing, but they should allow us some green space. We put 18 years of our love in it.”

The struggle over New York’s community gardens dates back to the late 1990s when the Giuliani administration auctioned off green space to developers. Despite fierce public opposition, a number of gardens were subsequently bulldozed.

A 1998 lawsuit by State Attorney General Elliot Spitzer blocked further destruction of the city’s community gardens and eventually culminated in the Community Garden Agreement of 2002. One hundred and ninety-eight gardens were granted permanent protection, which was hailed a victory by many, particularly after years of struggle with the unsympathetic Giuliani administration.

But the fate of the remaining gardens under the jurisdiction of HPD was still undecided.

One hundred and fourteen gardens were designated for development pending a garden review process, including 116th St. Block Association and Nueva Esperanza. The review required providing advance notification to the gardener, completing paperwork on the description and activity of the garden, and offering alternate sites if available. It also provided an opportunity for the gardener to appeal to their council members and fight for permanent protection.

The movement to protect the gardens has drawn support from Council Member Melissa Viverito (D-East Harlem), who briefly attended last week’s meeting. “We do need affordable housing but we don’t need to lose valuable green space,” Viverito said to the group.

As a means of negotiating with HPD on which sites would be given priority over development, Javadi is working with gardeners to provide comprehensive backgrounds on each garden’s history, the vegetables grown and community membership. HUG is also looking to build community support in order to improve their chances of winning permanent status for the gardens or at least acquiring replacement sites.

Upcoming events include a garden produce donation drive and a party at the end of August in which all gardens will be represented with displays of food grown at the various gardens.

“We’re very interested in saving what we have,” Chisholm said.

URBAN ESCAPE: Roughly 15 gardeners that identify themselves as Harlem United Gardens or HUG meet weekly on Friday evenings to prevent the further destruction of green space in their neighborhood: Photo by Ula Kuras