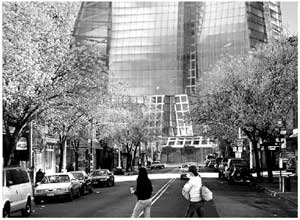 It’s a land grab fueled by corporate welfare, sweetheart deals and the subversion of democracy. It’s anti-community and the worst form of government and corporate collusion. What is it? It’s land speculator Bruce Ratner’s Atlantic Yards development proposal, and the only scheduled public oversight of the mammoth Brooklyn project is a single hearing to be held on Aug. 23 as a part of the state-run environmental review process.

The hearing will be held from 4:30 to 8:30pm at New York City Technical College’s Klitgord Auditorium at 285 Jay St. Out of scale and character with its surrounding low-rise residential neighborhoods, the Atlantic Yards project is the poster child of the overdevelopment epidemic that has plagued all of New York City during the Michael Bloomberg era.

At 8.8 million square feet it’s the largest project proposed by a single developer in the history of New York City. With towers ranging from 20 to 60 stories, the 16-skyscraper, 20,000-seat arena development to be erected in the heart of central Brooklyn which would make it one of the densest residential communities in the United States.

Ratner, whose development firm is part of Ohio’s Forest City Enterprises – the largest publicly traded real estate development corporation in the nation – has operated virtually unchecked by public authorities. The City Council and Department of City Planning have no oversight or vote on the proposal. The only political vote would be by the Public Authorities Control Board controlled by Albany’s three men in a room: Gov. George Pataki, Senate Majority Leader

While at least $2 billion in corporate welfare would go towards the $4.2 billion project, its approval process bypasses New York City’s democratic land-use review procedures and will never require a vote of any legislature – guaranteeing maximum subsidies with no genuine political oversight.

Bill Batson, N.Y. State Assembly candidate in Brooklyn’s 57th District, home to the proposed project, put it well, saying, “The commitment of these substantial public funds without a substantial public review is an affront to the blessing of democracy.”

Forest City Ratner’s pillaging of Brooklyn relies on the state’s abuse of eminent domain, which allows the government to take private property and transfer it to private developers. In this case, the use of eminent domain depends on the “blight” findings in the Draft Environmental Impact Statement – a 2,000 page document released on July 18.

Plaintiffs, property owners and rent-stabilized tenants will challenge the use of eminent domain – a challenge Ratner is clearly worried about. Avictory for the plaintiffs would likely stop the

project in its tracks.

Fortunately, a grassroots movement led by the umbrella group Develop Don’t Destroy Brooklyn (DDDB) has evolved into a community-funded, well-oiled volunteer machine over the past three years. DDDB is opposed to the project but in favor of sensible, democratic, community-based development.

The battle can and will be won, turning back the terrible precedent Atlantic Yards would represent. As Councilwoman Letitia James, who represents the areas slated for destruction rallied, “The power to fight is in your hands, it pulses through your body, it’s in your blood, it runs in your veins, and we have got to fight back.”

Daniel Goldstein is a spokesman for Develop Don’t Destroy Brooklyn