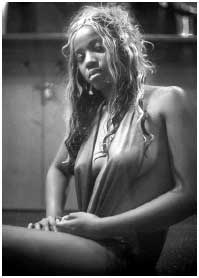 People are still drowning in New Orleans. The waters have receded but a year later those of us who waded through it carry the flood in our eyes. Driving through New Orleans, I see dry streets and people walking and catch myself blinking back memory that seems more real than sight.

I came back to see the premiere of Spike Lee’s documentary When the Levees Broke. Over 12,000 people gathered in the New Orleans Arena for the premiere. Survivors and celebrities shook hands and hugged. The camera flash made visible the victims who in the borrowed light of fame become part of history. I saw Mayor Ray Nagin. Reporters held microphones to his face. In the crush I asked him about the Ninth Ward and the thousands of homeless stranded in trailers. He never answered.

So the next day I went in search of the trailers. I drove an hour out of New Orleans to the FEMA Diamond Group Site to find rows of white trailers baking in the sun. At least 1,800 people live in the camp. A few weeks ago I could not have come here. FEMA blocked reporters from talking to evacuees. After public pressure, they allowed the media in but the news had moved on to Lebanon.

The residents are stranded in poverty. There are no public phones and people’s cell phones are turned off because they can’t pay the bill. I watched evacuees walk around aimlessly in the heat. Few people there have cars and those that do drive them around in slow circles. There is no where to go except the bottom of a can of beer.

“A lot of them hang out and get drunk,” said David Capone, the park manager. “That’s how they lived before the hurricane.”

Men sat on cars drinking, numbing themselves to the passing of time. Some numbed more than boredom. Mark Saint-Anne, a coppery man with fuzzy corn-rows recently returned from a tour in Iraq. “I got shot at, lost friends and it was just for oil,” he said. I asked him how his spirit was holding up. “Not onehundred percent there but I’m able to… you know,” he shrugged.

The pressure was building in the camp. A woman leaned on the rail. “Don’t come over with that shit. I’ll knock your fucking teeth out,” she yelled to a little girl who began hurrying away, head down. “Don’t worry. I know her,” the woman said.

A photographer who accompanied me told me of a kid with swollen lips and a bruised eye. How many children were dodging curses and fists? The silence dividing them from the world was dividing them from each other. Night came and kids played basketball in the shadows. Someone parked a motorcycle near them and left the headlight on. There was nothing else to do but play games in the dim light.

While evacuees still live in FEMA camps Mayor Nagin has readied their neighborhoods for demolition. With his tacit approval the City Council passed ordinance 22203, which decreed that homes not gutted by Aug. 29 could be bulldozed. A race between land developers and home owners has begun. If the real estate moguls win, one of the oldest Black neighborhoods in the city will disappear. Slaves and their descendants lived here and passed from generation to generation the memory and music to remind the world how sweet freedom is.

In the Lower Ninth Ward, near the place where the levee broke, a construction team was clearing debris. A Black woman in a vest and construction hat directed the men. “My name is Cassandra Andrews but they call me the Queen.” She told me about her flooded home. “It took a toll on me,” Andrews said. “When I rebuild the city I feel like I’m rebuilding myself.”

Volunteers from community groups like Common Ground have spent a year scraping houses clean so owners can claim them. I watched them haul rotten furniture out of devastated homes. Each day they returned sore from resurrecting life from the ruins. While driving, I saw a plastic skeleton on the fence, the kind used by doctors. I put it in my car trunk.

Later that night, I visited Curtis Muhammed, a civil rights activist who founded the People’s Organizing Committee, which guts destroyed homes for free. He follows the Ella Baker principle of obeying people’s demands. On Saturday the group held a Survivor Council meeting. Thirty residents fanned hot air around their faces as they sat in a circle. Muhammed sensed their exhaustion. “We take our orders from you,” he said, “If you want us to clean your home, get you a trailer, tell us and it’s done.”

The people listened cautiously. “I know they mean well but it’s hard to believe any promises,” an older woman turned and said. “It’s been a year and I still ain’t got electricity.”

As the Ninth Ward darkened, we drove to the brightly lit French Quarter. I strolled along Bourbon Street with my friend. Loud clubs and strip joints blasted us with music and sex. Hundreds of tourists and college kids prowled the streets. Not survivors, but still people.

This disturbed one activist from a group of People’s Organizing Committee volunteers. “It’s awkward” a young female member said, “we are here to help the People and this is what they want but the misogyny is fucked,” she shook her shoulders. “It’s time to go.” They left in a huddle, protecting their purity. We stayed, bought beers and watched kids stumble around.

In the window of a strip joint named Bewitched a young woman spun on a pole. I asked if we could take her picture. “You a reporter?” she asked hopefully. In a few minutes she told me her life: the fight with her mom, dropping out of high school, the dream of being the next Keisha Cole.

“I’m a singer,” she said. “I strip to make money but I sing to survive.” She sang Sam Cooke’s anthem “A Change is Gonna Come.” I stood there surrounded by leering men and listened. She needed to sing. I heard in her voice the memory and music of the slaves who knew how sweet freedom is.

Maybe it was anger. Maybe I wanted to remind the tourists of the culture New Orleans was losing, one family, one demolished house at a time. I asked my friend to get the skeleton we found earlier. He came back with it and I grabbed it by the ankles and dragged it up and down Bourbon Street. “Hey is that your wife?” asked a few onlookers who assumed it was a joke. “No,” I said. “It’s the Ninth Ward.”

Some scowled and walked off but I kept dragging the skeleton. For the first time since my arrival the memory of the flood didn’t overwhelm me. I don’t know why but while hauling the skeleton through Bourbon Street, I was laughing from my belly and felt, after a year of drowning, the waters recede.