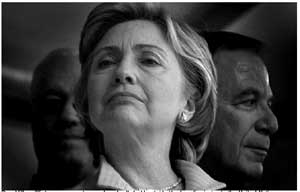 Sen. Hillary Clinton appears at a pro-Israel rally held outside the Israeli mission to the United Nations. PHOTO: FREDASKEW.COM

Israel’s slaughter of Palestinian and Lebanese civilians should be a moment of truth for the U.S. left. The Bush administration’s rush shipment of precision bombs to aid Israel’s onslaught should be a wake-up call for those who purport to follow antiwar principles, yet until now, have failed to take a clear stand against Israel’s role in the “War on Terror.”

The U.S. wars on Afghanistan and Iraq were meant as mere stepping stones in a strategic plan aimed at establishing U.S. – and Israeli – dominance over the entire Middle East. With the U.S. occupation of Iraq rapidly spinning out of control into civil war, Israel is providing an alternate route toward achieving those shared goals.

As the Washington Post argued on July 16, “‘For the United States, the broader goal is to strangle the axis of Hezbollah, Hamas, Syria and Iran, which the Bush administration believes is pooling resources to change the strategic playing field in the Middle East,’ U.S. officials say.”

The Arab leaders of Egypt, Saudi Arabia and Jordan, despite their subservience to U.S. imperialism, remain despotic leaders who could easily meet the same fate as Iran’s Shah in 1979. Israel remains the United States’ only “reliable” imperial partner.

Yet United for Peace and Justice (UFPJ), the largest national antiwar coalition, argued in a July 18 “action alert,” “We condemn Hezbollah’s attacks on Israeli civilians, and we condemn the Israeli assault in Gaza and Lebanon.” The statement repeated the mainstream media’s depiction of Israel’s assault as a response to Hezbollah’s seizure of Israeli soldiers and firing rockets into Israel, which UFPJ called “irresponsible acts.”

Echoing liberal commentators, UFPJ criticized Israel for its “disproportionate” response – as if Hezbollah started the conflict and Israel is guilty only of over-reacting. This latest episode merely provided Israel with the excuse for a major assault on Lebanon. Israel’s claim that it is attacking Lebanon to get its soldiers back belies the fact that Hezbollah has repeatedly offered to exchange the two Israeli soldiers for Lebanese and Palestinian political prisoners held by Israel, but Israel has refused.

In reality, Israel has had a plan in place for well over a year to take advantage of any opportunity that presented itself to launch a military attack on Lebanon, according to the July 21 San Francisco Chronicle. Gerald Steinberg, professor of political science at Bar-Ilan University, told the Chronicle, “In a sense, the preparation began in May 2000, immediately after the Israeli withdrawal.

By 2004, the military campaign scheduled to last about three weeks that we’re seeing now had already been blocked out and, in the last year or two, it’s been simulated and rehearsed across the board.”

Democrats have been vocal cheerleaders for Israel, taking turns with Republicans at pro-Israel rallies across the country. At one rally, Sen. Hillary Clinton condemned the “unwarranted, unprovoked attacks from Hamas, Hezbollah and their state sponsors” and called them “the new totalitarians of the 21st century.”

These accusations are absurd. Palestinians democratically elected the resistance movement Hamas to lead their government earlier this year. Israel invaded and occupied southern

Lebanon in 1982, the last of its troops pulling out only in 2000. Hezbollah gained its legitimacy as a resistance movement by finally driving Israel out of Lebanon, after 18 years of occupation.

The violence of an occupying force cannot be equated with the resistance of an occupied population, as if both sides are equally responsible for the bloodshed.

There is no symmetry in this conflict, and to pretend so is to obscure and distort what is really taking place in Lebanon and Gaza today. This attack on Lebanon is an extension of the U.S. war on Iraq. It is therefore astonishing that the dominant organizations of the U.S. antiwar movement are acting as though this is a sideshow, “even-handedly” condemning both sides.

Israel’s own barbarism has forced its role as attack dog for U.S. imperialism to the front and center of the antiwar movement. Within the last few weeks, thousands have protested Israel’s war on Lebanon and Palestine in Dearborn, MI, Boston, Chicago, and New York City. In each case, the demonstrators were predominantly Arabs and Muslims.

Moreover, the connection between the U.S. war on Iraq and Israel’s war on Lebanon and Palestine were repeatedly made clear – at the Chicago protest for example, with chants such as “Free, free Palestine; free, free Lebanon; free, free Iraq;” and “Occupation is a crime, from Iraq to Palestine!”

For these directly affected immigrant communities, no hand-wringing debate is needed to support genuine resistance against U.S. or Israeli war and occupation, as there is in the mainstream peace movement.

The weakness of the U.S. antiwar movement toward Israeli war crimes is a longstanding and shameful phenomenon. As journalist Laura Flanders observed in 2002, “On June 12, 1982, American activists massed in New York City to call for peace and nuclear disarmament. But the Central Park rally made no mention of the week’s own bombing – Israel’s then defense minister, Ariel Sharon, had just sent Israeli forces into Lebanon two days earlier.”

“But while we rallied, U.S. jets flown by Israeli pilots dropped bombs on Palestinian refugees and men, women and children in Lebanon… A message sent then might have saved a generation of Palestinians and Israelis from 20 years of occupation, fury and fear.”

The stakes are even higher now, as the United States has made the Middle East the testing ground for its global domination. There are principles and thousands of civilian lives at stake again, today.

Sharon Smith is the author of Women and Socialism and Subterranean Fire: a History of Working-Class Radicalism in the United States. This article was excerpted from counterpunch.org.