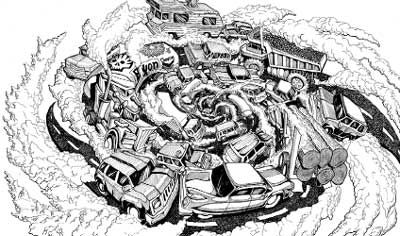 One year ago, New Orleans and the Gulf Coast residents were blasted by Hurricane Katrina, the costliest storm in U.S. history. For many, more shocking than the wind and flooding was the inadequate government emergency response and the possibility that global warming was a factor.

From the mucky waters of New Orleans, several groups emerged to provide aid to victims and make global warming a top priority. The volunteer-based Common Grounds Collective, whose motto is “solidarity not charity,” began offering assistance, mutual aid, and community support to Katrina victims days after the storm hit.

A second group, Rising Tide, promises to confront global warming at its source, using a no-compromise approach to stopping the extraction of fossil fuels and preventing construction of new fossil fuel infrastructure while building sustainable communities. Rising Tide North America formed a month after the Department of Homeland Security and the FBI declared “ecoterrorism” “the number one domestic terrorist threat” in January 2006.

Rising Tide members will be among the tens of thousands demonstrating in Mexico City in October when the G8 negotiates a climate change agreement to replace the Kyoto Protocol, which expires in 2012.

“Poor, indigenous and environmentally vulnerable communities should not bear the brunt of disease epidemics, droughts, floods, melting ice, rising oceans, hurricanes and other catastrophes caused by the global climate change that rich countries are responsible for due to our prodigious burning of coal, oil and gas for energy,” said Ethan Green of Rising Tide North America.

The Camp for Climate Action hopes to attract thousands to England’s Megawatt Valley on Aug. 26-Sept. 4 to learn about global warming and techniques for direct action against “climate criminals.” Participants plan to converge on the Drax power station Aug. 31 for a creative mass action to shut down the United Kingdom’s largest emitter of carbon monoxide.

On Aug. 25, more than 30 cities marked Katrina’s anniversary with a Critical Mass bike ride, “specifically drawing the connection between the oil industry and the historical role it played in setting the stage for Katrina,” said Maine organizer Emily Hornback.

“Unlike Rising Tide, most other organizations who say they work for climate protection merely promote technological reforms to the capitalist economy, and shy away from demanding deep changes that address the common causes of war, social and economic injustice and ecological destruction,” said Philadelphia-based activist Ethan Genauer.