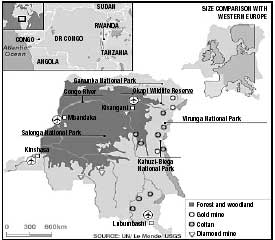 Oct. 29 will be an important day in the history of the Democratic Republic of Congo (DRC). The run-off election between President Joseph Kabila and former rebel leader Jean-Pierre Bemba will be the nation’s first contested presidential vote since 1960. The first round occurred on July 30, leaving Kabila shy of the 50 percent mark needed for a win. He garnered 45 percent to Bemba’s second-place finish of 20 percent. After the first-round results were announced, however, fighting broke out in the capital of Kinshasa between the forces of Kabila and Bemba on Aug. 20, leaving at least 23 dead. The clashes raised fears that whoever wins, war could return at any time given the fragility of the political situation and the multitude of parties involved.

Some 17,000 U.N. peacekeeping troops are on hand, but the DRC remains deeply divided. Kabila drew his support from Eastern sections of the country but could only muster 13 percent of the vote in Kinshasa, which went for Bemba by more than 60 percent.

It’s easy to see why Congo’s citizens are eager for peace. They have lived through incessant violence from the time King Leopold II of Belgium began his rule in the mid-1880s. Since the beginning of the Second Congo War in 1998, the death toll has passed 4 million, the highest of any conflict since World War II. And although the war officially ended in 2003, aid agencies say that war-related hunger and disease continue to kill over 1,200 people a day.

Many Congolese hope for a long-awaited peace, but wonder what real changes will take place as both Kabila and Bemba have records of serious human rights violations.

Kabila is accused of ignoring the crimes committed by his security forces against civilians. A May 2006 report by the U.N. Organization Mission in the DRC (MONUC) states that “the routine use of physical violence against civilians by members of the security forces was reported wherever army and police were deployed. Threats, beatings and arrests were usually motivated by attempts to obtain money, goods, livestock or mined products from civilians. High numbers of rapes and other incidents of sexual violence against women and girls continued to be reported throughout the DRC, the main perpetrators being the army and police officers.”

Bemba, one of four vice-presidents in the current transitional DRC government, is the leader of the Movement for the Liberation of Congo (MLC), a rebel group turned political party, which was backed by the government of Uganda during the war. According to MONUC, evidence reveals “systematic looting and rape” as well as summary executions and abductions by soldiers of the MLC and the Congolese Rally for Democracy/National during their occupation of Mambasa territory in the northeastern part of the country in 2002.

The roots of conflict run deep in the Congo. Colonialism, the 32-year dictatorship of Mobutu Sese Seko, the country’s mix of poverty, vast natural resources and lure of profits and long-standing tribal and ethnic tensions are all culprits.

The last two wars stemmed from the 1994 genocide in Rwanda, when the Interahamwe – the Hutu militias responsible for killing up to one million Tutsis in Rwanda – fled across the border to the DRC. Rwanda’s government, worried that the Interahamwe would mount an offensive from across the border started sending forces into DRC territory and arming the local Tutsi population there, the Banyamulenge.

The First Congo War erupted in 1996 when the Banyamulenge, who were told to leave the DRC or be killed, rebelled against Mobutu’s forces, backed by Rwanda and Uganda-backed rebels, led by Laurent Kabila. In 1997, they eventually toppled Mobutu, who seized power in 1965 with backing from the CIA and Belgium.

But Laurent Kabila grew wary of the Rwandan presence in the DRC and forced them to leave, backed by troops from Angola, Zimbabwe and Namibia. The United Nations, meanwhile, accused Rwanda, Uganda and Zimbabwe of using their forces in the DRC as a cover to pillage its huge mineral wealth.

The DRC’s second war started in 1998 between the Congolese army and shifting alliances of rebel militias. The two main rebel groups were the Rally for Congolese Democracy, backed by Rwanda, and the Movement for the Liberation of Congo, supported by Uganda. It’s often been referred to as the “Great War of Africa” with warring factions participating from nine states: the DRC, Rwanda, Burundi, Angola, Zimbabwe, Chad, Sudan, Namibia and Libya.

In 2001, Laurent Kabila was assassinated and his son Joseph Kabila was voted in as his replacement by Parliament. In 2002, Kabila signed a peace deal, which set him up as interim president and gave both rebel groups seven ministries in the interim government. Behind the ethnic and tribal tensions is a story of greed. The DRC is rich in natural resources like diamonds, gold, crude oil, copper, cobalt and coltan yet the per capita income is only U.S. $120.

The country’s diamond industry is rife with exploitation. It generates more than $700 million a year in the DRC, and millions more for resellers, but diamond miners earn less than a dollar a day. Most of these miners are children between 10 and 16 years of age. There is a worldwide system to verify diamonds – the Kimberley process – but it doesn’t require buyers to verify anybody’s age.

Kabila rewarded his military allies with stakes in Congo’s mining sector. Zimbabwe received shares in copper and cobalt mines and Namibia in diamonds. Angola’s national oil company, Sonangol, was allowed to create a subsidiary, Sonangol-Congo, which has a major role in production and distribution of oil in the DRC.

The West also has a vested interested in the DRC. Coltan is used in cell phones, playstations and other electronics, while cobalt is essential for the nuclear, chemical, aerospace and defense industries. In 1997, Laurent Kabila signed a $1 billion contract with American Mineral Fields International (now called Adastra Mining), to control copper, cobalt and zinc mines and processing plants. The main gold exploration ventures in the DRC include Canadian company Banro, U.S.- based Anglo-American, Swedish Metalor, and the number one and two gold producers in the world, South Africa’s Anglo-Ashanti Gold and Barrick Gold of Canada.

The ongoing fighting has fueled official corruption, making it easier for corporate interests to take advantage of the situation. According to human rights watchdog Global Witness illegal exports of minerals abound across the DRC-Zambia border, with government and security officials either turning a blind eye to false or inaccurate export certificates, or actively colluding with trading companies to circumvent control procedures.

In a country of such need, one can easily understand why such riches would create corruption and conflict. It’s no surprise that the last two wars erupted in the northeast DRC – it’s where most of its gold and many other mineral resources are located. The most volatile province is still North Kivu, which borders Uganda and Rwanda.

Oct. 29 will be the test if the hopes of millions for peace are fulfilled or if the DRC plunges into around round of war.