BLACK ROCK CITY, Nevada—“Welcome home!” He shouts. We hug and I look at Burning Man, a city rising in the vast Nevada desert. I came here to pour out the last water from New Orleans. A year of rage and sadness sloshed inside me and I hoped the desert would soak the last of it away. But was it possible to “come home?” I had seen a city be flooded and a people made homeless. How could I let go of pain where no one wanted to be reminded of it? I went to Center Camp, a gigantic tent where the sun beamed on New Agers entwining limbs in slow dance. A woman leaned to me. “Why can’t this be the real world,” she paused. “Is the real world even real?”

Attendees often describe the event as truth and the outside as illusion. It is easy to feel this in an empty desert used as a stage to act out fantasy. Of course, fantasy is the refusal of separation. Hidden desires are acted out in hopes of revealing the true self. It is allowed even demanded. “Don’t be a spectator” is shouted by anyone who sees you watching rather than doing.

Burners speak of the event with religious intensity. The feeling of truth comes from this rare unity but it is a unity created by escaping differences not overcoming them. The real world separation from ethnic poor is finalized in the isolation of the desert. It is relevant because Burning Man borrows from cultures of color, to the point of being a form of minstrelsy.

Near my camp was a Hare Krishna site where whites with Hindu face-paint swayed and chanted. “We’re all one cosmic consciousness,” I was told. They smiled sweetly and fed me. Their sincere kindness eroded my guard.

I felt a genuine openness. Our conversation turned to New Orleans. I tried to say how it divided our nation but heard “we’re all the same cosmic consciousness.”

It sounded less a profound truth than an escape from pain through denial. Like the many attendees with dread-locks and saris, they wore a mask of color. They enjoyed the freedom of otherness without the burden of history and the exposure to power that real people of color endure.

The next day a friend gave me two pills of ecstasy. “If you don’t find what you’re looking for,” he said, “these will help you forget you tried.” I pocketed them, walked around and found an art installation with rows of crosses for soldiers killed in Iraq. A veteran kneeled and wept.

Once, the Christian cross was a symbol of sacrifice to me. Now it seemed an empty icon. I needed communion and found a Common Ground activist. We had met in New Orleans. “I was here when we heard about Katrina,” she said.

“People said in that hippie way, it was meant to be.” Her eyes flashed, “I was like what the fuck is wrong with you.” We shook our heads. I gave her a pill, if we could not believe in joy we could induce it. On the climactic sixth night of the festival, when burners set fire to a giant wooden effigy, I took half a pill. After the Man blazed and crashed I circled the inferno. My friend from New Orleans sat and stared into the fire. I hoped it burned away her memory of the flood.

I walked to Nexus, one of the large clubs. The mild glow of ecstasy forced me to feel my body. It left me knowing I have this small gasp of time on earth and the only meaning it can have comes from how I share it with others.

Nearby a young woman stood stiffly. I remembered the crosses and said, “Here,” and put the last pill in her palm. She smiled, “You totally read me.” 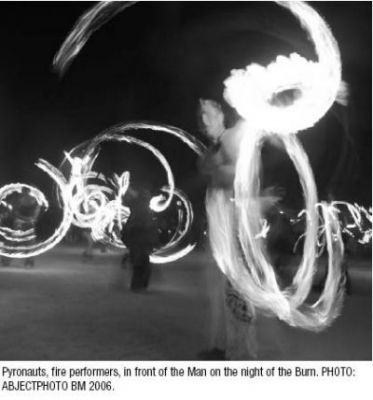 I leaned in, “Remember the story of Jesus feeding the masses.” She nodded. “Maybe it wasn’t a physical miracle. Maybe he had them split bread until each had a useless bit and realized they sacrificed hunger for togetherness. No one was left out.

Maybe that was the real miracle.” She hugged her thanks. The ecstasy had worn off but a stronger joy reached through me. I gave away the pills that could numb my exile. It left in my mind a selfimage I could believe in and while dancing, I held myself like home.