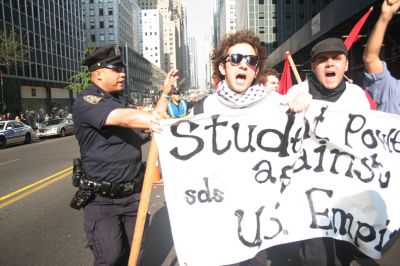 Just days after the startling declaration from United For Peace and Justice to protest President Bush’s speech to the United Nations, “permit or no permit,” 1,500 protesters made their way to the UN on the morning of Sept. 19.
“We got to get a message to that son of a bitch! We are serious about this! No more killing!” said Marie Runyon, 91.
The silver-haired, longtime activist and former Assemblywoman is now a member of the Granny Brigade for Peace. Last fall, she was one of 18 “peace grannies” arrested when they tried to enter the Times Square recruiting station. 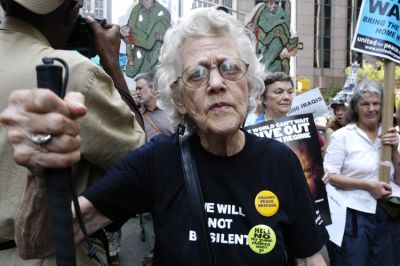 “I stopped counting after 28 arrests,” said the partially-blind Runyon, who has been arrested for everything from the Vietnam War to tenant evictions to the Diallo shooting.
Runyon’s friend Charles Rainford, a spry 81-yer-old, was walking alongside her. “I think we all need to protest. This man is a criminal, a murderer. He’s the worse thing to happen to this country in 200 years. A lot of people who are opposed to it [the war], say nothing.”
Although sixteen antiwar activists were arrested in a separate act of civil disobedience at noon in front of the UN on First Avenue and 44th St., the UFPJ march characterized an event that was a far cry from wholesale civil disobedience threatened earlier in the week.
Officially permitted by the NYPD at the last minute, much of the march happened in the far left lane of traffic-clogged Midtown streets before ending in a rally behind barricades at Dag Hammarskjöld Plaza.
As an alternative to what protester 20-year-old Pratt student, Dan Mirisola, called the “tired and old” antiwar movement, members of the newly-reformed Students for a Democratic Society (SDS), an antiwar student group, also embarked upon their own, unpermitted protest that day.

“We don’t believe we need a permit to march,” said John Cronan, a senior at Pace University who helped last year to found the SDS chapter at his college.

“ I think students need a voice in the antiwar movement,” explained Brian Kelly, a founder of his Pace University SDS chapter.

Keeping with the ethos of SDS, which SDS member John Cronan described as “standing up to unwanted authority” the group marched in a winding and sporadic sidewalk parade that began at 42nd and Fifth Ave and ended at Dag Hammarskjöld Plaza. Arriving an hour before the larger, permitted UFPJ antiwar march was schedule to arrive, the crowd of fifty protesters, many freshman at their first antiwar protest, faced what looked like a large, empty cage.

Police officers waited at either side of 47th street – more bemused than hostile to the marchers, although indicating that they would either have to keep moving or enter the gleaming, silver barricades. The crowd stalled, trying to decide between marching or being penned.

“Who’s going in a pen?” asked someone with a megaphone. “Cages are for pigs,” another shouted back, hyperbolically. The crowd chanted “freedom of assembly” while a member recited the First Amendment. Then, not knowing what else to do, they decided to march to Grand Central. For the next hour, the fifty students engaged in a limited direct action experiment, waving red flags and chanting “whose streets? Our streets” to the casual passersby while being escorted by a brigade of police scooters. Frequently barricaded and prevented from marching on any direct route to the UN the students came face to face with the limitations of democracy in a city adept at diverting, dispersing and caging political expression.

“I’ve actually never turned around so many times at a march,” said Davey Vacek, a 20-year-old Junior from Pratt Institute who helped found the school’s SDS chapter last year. “I guess there wasn’t enough organizing or enough planning, to let people know what if the cops do this… how are we going to respond?”

That the protest eventually joined the larger, more subdued UFPJ rally and ended within the safety of the barricades only heightened some marchers sense of frustration.

“ We want out of the pens and into the streets,” said Mirisola, also founding member of Pratt’s SDS chapter. “We don’t want to be pushed around.”