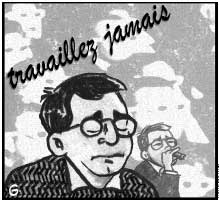 Guy Debord: Revolution In The Service Of Poetry (2006)
By Vincent Kaufmann
University Of Minnesota Press

Revolutionary, romantic, heretic, theorist, vagabond, what was Guy Debord? Vincent Kaufmann’s new biography Guy Debord: Revolution in the Service of Poetry, translated by Robert Bonnono, demonstrates that such a question is inadequate. For Kaufmann, we must know who Debord was. Without recourse to pop psychology or gossip, Kaufmann discovers that the man who is often credited with foreseeing and inspiring the Paris student revolts of May 1968 was no flash in the pan, but rather a remarkably consistent man. His first graffiti, “travaillez jamais” (never work), written at the age of 20 in 1951, bears the stamp of radicalism, simplicity and precision, from which, for Kaufmann, Debord would never stray.

Where autobiography becomes a form of social criticism and where life becomes theory is where we find Debord. He wrote what he lived and lived what he wrote. And he indeed never worked. For Kaufmann, the consistency of Debord’s devotion to himself was a wholesale rejection of every aspect of the world as it appeared in its ruling representation, what Debord famously termed “the spectacle.”

Debord founded an avant-garde devoted to “creating situations,” the more revolutionary the better. The goal was to integrate life and art. The street was the place where this became possible. Kaufmann does well in describing their most prominent tactics. “Derive” – the art of systematic wandering – and “détournement” – the reappropriation of others’ words in different contexts – were intended to create situations where life could be experienced authentically, without mediation.

Kaufmann points out that these techniques were hardly original and in fact borrowed from previous avant-gardes, but for the Situationists this was of little matter. The tactics had been “detourned” and in the hands of the right practitioners they were revolutionary. In Debord’s hands, they were an art of living and a steadfast way to refuse being co-opted.

Unsurprisingly, the task was easily misunderstood. The Situationist International had to remain small. Even today some of Debord’s barbs hurled at more “mature” leftists crack off the page. On Sartre: “It’s not enough to reject the Nobel Prize, you have to not deserve it in the first place.”

But the book is not a laundry list of leftist squabbles or a recital of the Situationists’ mythologies. what the SI didn’t do, how small it remained and how suddenly it disappeared. There were no SI battalions in May ’68, but their invisible hand is evident in the slogans still remembered today: “Take your desires for realities;” “Demand the impossible.”

Naturally, talking about an invisible actor makes for some repetitive and overly rhetorical moments. Long passages in the middle of the book become proof of Debord’s insistence that “the more well received our ideas, the shadier we will become.” Kaufmann occasionally lapses into wistfulness and does not give context for the uninitiated. Overheated defenses of Debord against previous paper-tiger biographers also make an unwelcome appearance.

Kaufmann returns to solid ground with a unique reading of Debord’s most famous book, The Society of the Spectacle. Since the concept of the spectacle cannot be historically situated, (always leading back to a proto-communist paradise before the fall), he claims that perhaps the concept functions as a way of setting off the world, throwing everything into quotations and thereby with a good deal of irony and caustic humor finding a place for oneself. This resistance is what gives Debord his coherence. Despite a recent spate of interest, he has remained interior to himself, and at some level indecipherable, a privilege usually reserved exclusively to the spectacle.

There are very few photos of Guy Debord. Perhaps because of this he has often been described as complex, inscrutable or obscure. This book does well to demonstrate the willful misunderstanding this position entails. Debord and the avantgardes he led simply made a conscious choice, “a bet on obscurity,” in order to avoid being ensnared by “the spectacle”. Kaufman admires Debord’s consistency, his refusal to develop.

Remaining clandestine was also a way to avoid growing up. And to that effect, Kaufmann calls the SI’s project a “rereading of Marx by Peter Pan.” Its members, “lost boys,” wandered the hidden passages of Paris and whatever else remained obscure, radically refused the world as it was. Their reward was May 1968. And their own disappearance completed their “historical necessity.” Their ideas though, are still lying in wait, just beyond appearances, right where they are most at home.